I always see planes flying over my house but I need you guys help to help me figure out where these planes are heading.

I took this screenshot below of Auckland city on flight simulator (sorry its so big), and made a black square where my house is. I have drawn in a pink arrow showing where the big airliners fly over at about 2,000 feet (I think for landing) then they turn sharply to the right (as the pink arrow shows) These planes are mostly from Australia, with a few of them coming from the USA.

The green arrow shows where GA fly above a river inlet), normally heading in the way the arrow shows. Why are they staying above the water, there is no line on the map or anything indicating they should do so!

The orange line shows where the helicopters fly. Only helecopters come from this direction as they head towards the city, but I think it is because they are heading to NZAK which is a heliport in the central city. 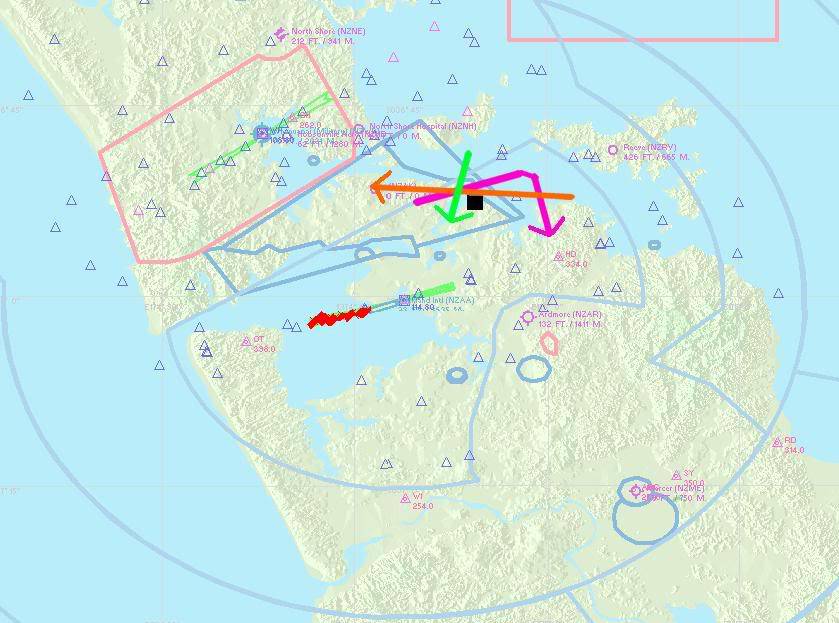 The active runway at my local international airport (NZAA) is runway 23, and you can see the visual glideslope on the map above for it. I have crossed out the glideslope at the other end because it isn't used very often.

If anyone can tell me where these airplanes are heading, and draw in thier routes towards the airport on the map above I would be gratefull.

I don't think I have explained this very well but I hope you get the jist...
🙄
Thanks,
Andrew

Andrew you will be able to find all the information here on aeronaututical charts, but it could take you a while to trawl through them. 😉