I've been quietly adding AI traffic to FS2004 over the last couple of months from PAI and WoAI etc...

It looks great and gives a whole new feel to the sim.

The AI behaviour has been perfect (apart from witnessing a TAP A310 slam into runaway at Heathrow with its nosewheel locked, causing a huge black trail and smoke cloud!)

But yesterday, after takeoff from Vancouver bound for Seattle, I noticed a great mass of AI traffic (airborne) on the Traffic Map. So I picked a jet to view and looking around was amazed to see 15-20 airliners rapidly descending from 20,000ft or more using spoilers to slow. They began to group like an impressive but totally useless bomber formation and eventually lined up (one behind the other) for Tacoma. Eventually, some began to "fly through" others and only a handful landed, as most got the go around. Stranger still, when I arrived at Tacoma, 15 mins later, the mass had dispersed and traffic volume seemed perfectly realistic. I have the Official AFCAD file for SETAC so not really sure how this could have happened. Amusing though.

I've experienced a somewhat similar thing at Osaka, Japan a while ago while in-flight. I entered Osaka airspace and the sim froze for a moment, loading new traffic.
All the sudden I was surrounded by a vast armada of A/C, I couldnt count them, there were that many.
ATC kept blurting out instruction after instruction for what must have been at least 5 minutes, (surprized that guy didn't suffer a heart attack :lol🙂 - it was chaos.

Very funny (and even impressive) to watch though..

Glad you found it funny too! I know it's just a software program at the end of the day but it still it still surprises me when things as unpredicable as that happen!

yeah i got this ay Narita airport in Japan. (except only 4 planes)
I agree, it is quite a nice thing to look at 😎

Did anyone grab a screen shot of those large groups of aircraft - would love to see it.

Stupidly, I didn't bother! Thought it would happen again and I'd do it next time, but so far no repeat. D'oh! and spooky....

I did, however get a screenshot of that TAP A310 skidding/taxiing off the runway at LHR! Will post it if I can work out how.

I present you with weird AI evidence! He slammed into runaway in font of my eyes before locking the nose wheel and skidding the entire length of the rollout and onto the grass, then the taxi way....... 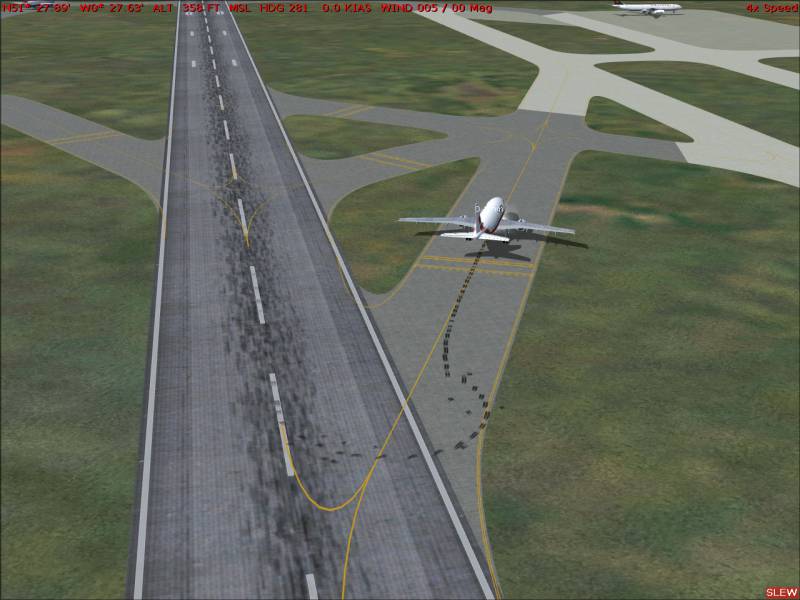