You are more than a sick person.

All of your posts has hidden meanings and you try to prove that you are the best...Pointless...You are ironic to people and when you help if someone dares to have an opposite opinion from yours you read all the internet in order to use it against him.
You read all the posts and keep the mistakes in order to use them as a weapon for future fights you will create...
You create clubs with your sick imagination and you like it...You think that everybody is a spy here and all of us are against you...No one cares about you my friend....Keep this on your mind...

You have destroy a lot of topics more than you can imagine...Satisfaction for you?

Get a life the sooner and try to behave like human...If you haven't forgot what human is. Exclamation

My friendly opinion but unfortunately I'm not kidding.

And BTW...I doupt if a person who knows everything doesn't know how to resize a pic...Besides...google is your friend...and you will also find a lot of read me files about it.... Wink

And please dont reply with a thousand lines post...Its boring...

I reply with as many lines as I wish and if you find this or anything else for that matter boring, than it's you who's got a problem.

Now just imagine (if you can) if I had bashed and flamed you the way you just did me, Radarman would have either locked the topic, deleted my post or mollycoddled you - why, I can only guess. So much for 'Civility'.

But I'll keep it short. My advice to you, be a little more patient and you're ambitions of becoming the Chief Moderator here at Flyaway will eventually become true.

God help us all.

I do not really care what has gone in the past but the thing is you are both valuable members and it is moments like this that spoil forums. Please note I am not pointing the finger at either member.
Read, absorb, move on. There are issues in life worth bickering about this is not one of them.

Ah Tailhook is back then I see 🙂

The place for dirty laundry is the hamper...airing it is not suggested.

Perhaps this becomes understandable if a little perspective is added.

This started in the sig size announcement (now locked) in FS2004 General. Although the original announcement was made by Radarman, it was clearly Flyaway's call. Apparently, this was due to the nattering ninnies of the Sig Police. One of those complaints almost certainly came from a member who had the gall to claim that his kind of sig was good, but square ones were not.

Both Tailhook and I took issue with the sig size restriction, though our tactics differed. The change it or lose it, approach of the announcement was guaranteed to provoke opposition.

To make a point in the discussion/debate/argument, Tailhook posted something that mimicked Greekman. Predictably and understandably, Greekman responded.

Radarman, who has become increasingly intolerance of protracted disagreement, predictably, locked the thread...probably, due, in part, to some of my statements in the thread.

My guess about the intolerance to prolonged disagreement is that there are a number of members who run shrieking in terror when people disagree. Despite the fact that the world is full of disagreement, they presume forums must be all warm and fuzzy. Guess what? Forums are part of the real world.

Now that I've gotten everyone mad at me, I will go out to walk the dog. I'll deal with his

and then return to deal with the

waiting for me here. 🙄 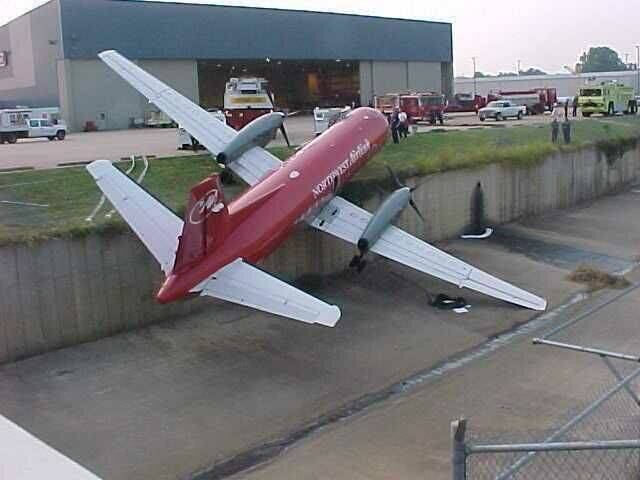 On a lighter note I've just been promoted which includes a whopping pay rise!

Congratulations, 👏 It's aways nice to be respected in ones career.

PS Still looking for help with the aircraft photo above...anyone?

This may be the Off Topic forum, but I don't think that extends to cluttering threads with non sequiturs.

The first one was amusing, but now it appears the "OMG, we can't have disagreement" contingent is arriving in greater numbers.

I may have to stop being so warm and fuzzy. 😳

CRJcapt, Interesting pic. After some digging on Northwest Airlink I found some shots at a different angle. This is what happenes when the chock isn't set so it says! Thankfully no-one was injured.

it appears the "OMG, we can't have disagreement" contingent is arriving in greater numbers.

These folk are like the bell that sounds the end of the first round in the "HANDBAGS AT 10 PACES"spat.
Round 2 will start soon enough,so take your seat. 🙄 😂

Yeah remember seeing this one before. AC going to or had been on maintainance techies forgot to set parking brake/place chocks and the rest is history...Doh!!

it appears the "OMG, we can't have disagreement" contingent is arriving in greater numbers.

These folk are like the bell that sounds the end of the first round in the "HANDBAGS AT 10 PACES"spat.
Round 2 will start soon enough,so take your seat. 🙄 😂

Don't laugh. Some handbags have guns in them.

However, I see the ladies knitting circle has descended in force. So, the unresolved issues will smoulder until they explode at a later time. And, we'll all hang out answering questions like, "What are flaps for", for those too lazy to google.

I have better things to do for the rest of the day, So, I'll just leave everyone to having their warm milk.

Gentlemen ( and I use the term loosely) take your dirty laundry to the PM's.

No I'm not going to lock this...yet. I want to see how long this childish action goes on.

Apparently, this was due to the nattering ninnies of the Sig Police. One of those complaints almost certainly came from a member who had the gall to claim that his kind of sig was good, but square ones were not.

Very early in this thread, I added some comments. I have just read Crosschecks "farewell message" and I think before tapping away at the keyboard EVERYBODY including myself needs to think a little about why we are all here, and how insignificant a typo is or when somebody gets something wrong etc etc. If someone gets personal leave it, move on let this remain a friendly forum. Worse things happen in life.