Guys, I need help. When I tried to download a flightplan from avsim, and install it to my flightsim by MRAI Installer, it says it only works on files from mostrealisticai.com. When I tried to go there to find flightplans, I can't find any downloads! I kept circling around the website several times but I keep ending up at the same place. I even clicked on downloads page of the website and I still can't find anything! Can anyone help me on this? If so, give me the link to the downloads page WTIH DOWNLOADS on it! Thanks for anyone helping me!

Oh yeah, when I tried to install flightplan, they say that there's integrity errors. What does this mean? Here's what I'm talking about:

Also, what does No MDL file mean and how can I fix this?

I think I have that same problem sometimes whenever I install some airplanes but I just ingnore it. This happened a while ago but I dont know what I did to fix this. I will think on this some more because I remember having that same problem.

I can see my new AI Aircraft, but there's no textures on it! Even when I installed textures in the airplane it still didn't work. Does anyone know how to fix this? Here's a screenshot of it. It's dull and gray. 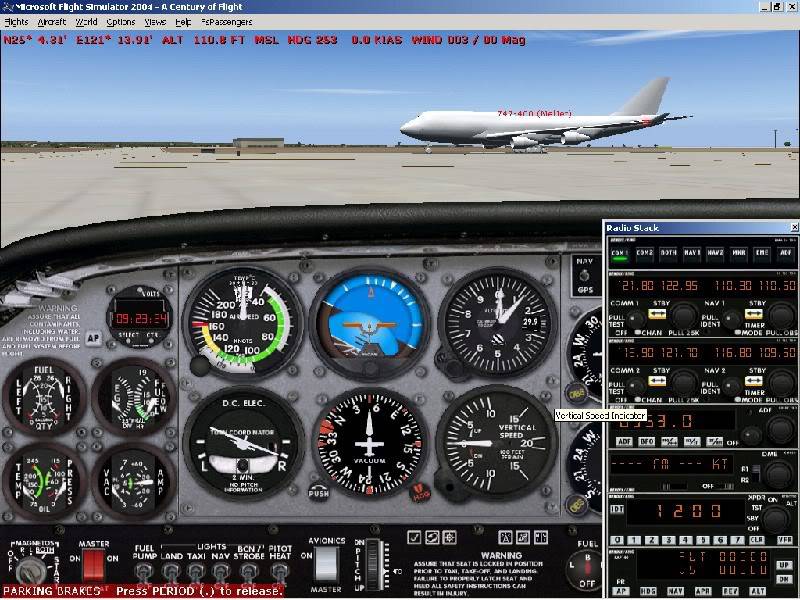 hey, 🙂
not sure i know your exact problem but, I use lee swordy -s Traffic Tools.
You paste the flight plans onto the end of the wordpad document that says "flight plans txt." inside of traffic tools folder. then you paste your aircraft from your downloads aircraft txt. or type them if there isn't too many, to aircraft txt. then compile them.
your error's that you are listing, appears to be that your aircraft numbers on you aircraft txt. are not numbered properly(the text you downloaded)
[Always make a back up copy of your airport, aicraft, and flight plan.txt's before messing with them!!!!!!]
your textures---may be that you didn't assigne a texture for them in "aircraft cfg." notepad or you didn't add the next [fltsim.x] enteries.
texture=panam for example ot texture=1 depending how the next texture you have. if you have just one in the aircrafts folder then it would be texture= (nothing typed here) and the folder would simply be named "texture" for the texture folder. make sure you have only one folder with the texures inside that and not a subfolder within a folder.

😕 In fs2004 you can use more than one "traffic.bgl" as long as it starts with "traffic" and ends in" .bgl" (fs2002 could only use one and you had to paste).
".mdl" is your model located inside your aircrafts "model" folder.
Should be ok, dont worry about it.

Lets say you have a TWA 717 flight pack.
on the aircraft text (Aircraft.txt) you have three "models" listed.

AC#xx=your planes number assignment for the flight on the flight plans.
438= ?i believe your cruising speed?
"717aipack1"= how it should be exactly written on you "aircraft.cfg" under title=
EXAMPLE:
[fltsim.0]
title=717aipack1

Your title= maynot be correct, and traffic tools wont find the model (.mdl)
(It appears that 38 flights it can't match a model too (i think?)

on your traffic.txt were your flight plans are it may look like this for example.

AC#38 will be asigned to aircraft #38, in this case a American Airlines 717
AC#39 will be assigned to the TWA one
AC#40 this flight belongs to a Interim livery one

N717TW is the regy that the computer assigns to that flight

50% is if you slide your slider below 50% in fs2004 atc options for ai craft, that flight willnot show up unless the slider for AI aircraft is 50% or above.
Now the TWA717 package comes with one folder names "TWA717". inside that folder is a "model" folder, and three "texture" folders.
And a "aircraft.cfg", and a "717aipack1.air" file, some have a sound folder and very rare, AI's have a panel folder (they only take frame rates and your computer performs better without them).
on your "aircraft cfg" each "[fltsim.x]" should have a entry for each texture folder, in the twa717 package it was like this.
[fltsim.0]
texture=

check that on "aircraft cfg." and that its ok?
check that you even have a model folder in the aircraft in question, and that its not just a texture folder?
I had downloaded some planes, well i thought they were just planes and i threw em in FS and nuthin showed up, when i went to check i unzipped just textures what a bummer turns out for some payware one too 😞

Don't worry, the textures showed up! It's EVA Air 747 textures!