Hi,
I just wanted to ask you a question about the go-around. Today, I made a long haul from Bahriain International airport (BAH), bound for Schipol in Amsterdam (EHAM). I got pretty upset at landing, because the ATC requested a go-around when I was on short final. Some stupid AI aircraft was taking too long getting off the runway. Plus, It was my first time in the 757 Northwest Airlines, with a new panel. I was ticked off, but still, I want to see if such a thing can be resolved, is there anyway to make the AI aircraft move a little faster. I doubt it, but still, you never know. I know I could have reduced the traffic density, but by then, I was too focused on landing.
Thanks

I can't answer your question regarding making the AI move faster. I've come to realize that FS09 ATC makes mistakes-- it is especially bad about accounting for aircraft speed, but in the past I've actually been cleared to land and collided with an aircraft taking off the opposite direction!

If I'm told to "Go around" because of an error by ATC, I just chalk it up to an error in the program and go ahead and land, if I think I can get away with it. ATC will get angry with you, and say something like "You are not authorized to land! Clear the runway!" but that's about it. It's a simulator, there are no actual penalties or fines involved. 😂

A couple of days ago, I was in the Lear Jet, on final coming into Fairbanks, Alaska, and a DeHavilland Dash 8 passed me, right on my wing tip, just 7 feet (~2 m) higher than me! I started my descent and passed him, but ATC told me to "Follow the Dash 8 on short final," when I was already in front of him! Just as I was about to touch down, they told me to go around. I just landed and was clear of the runway before the Dash 8 got there.

It's especially bad if you're flying VFR, because if you're a little slow making the turn to final, they may put a Piper Cub doing about 50 knots in front of your jet. 😳

Flight Simulator 2006 will be better in this regard, I hope.

Yesterday I got my aircraft destroyed in a mid-air collision. I was on a flight from Pittsburg to Chicago Midway. I was VFR at 8,500 feet which is appropriate for VFR westbound flights, and I was under the "watchful eyes" of ATC on "flight following". When I was south of Toledo they warned me about an aircraft, and I responded that I had it in sight. A couple minutes later an aircraft came in from the right and sliced into my flight deck. Of course I was sent back to the starting gate in Pittsburg.

I can see getting clobbered if I fly into a busy airport unannounced, but not "out in the boonies" while I was supposed to be protected from that sort of stuff. That was the first time I got splashed in mid-air. I guess we have to keep a close eye on those ATC guys, yuk, yuk.

TCAS is built into Active Camera and Ultimate Traffic, I don't know what other add-ons have it.

See if this is of any help.

File IFR! VFR you need eyes in the back of your head. Flight following is a service if I remember correctly similar to the UK's flight information service which does not include have to include traffic info. Good controllers give you traffic but it is not a requirement. VFR...your eyes.
Under IFR with a Radar Advisory Service they must keep you seperated.
Good to see you are still alive and able to keep flying!

I like what you said about FS9 and accounting for aircraft speed. This has been an issue for me as well. Slowing and still wing past some heavy on final. Takes a big chunk of realism when it happens. No TCAS alert or speed restrictions given on approach.

As far as the AI's are concerned, I have read in other forums where M.Soft defaults and also the addons we have are mostly supposed to be programed w/ the high or Max RTO so that they make the 1st or second taxiway off. There is an addon that will feather the AI's all the way to about the mid runway or so for a more smooth and 'accurate' representation of real-world landings. That is to say if one can say that that behavior is entirely accurate at all times +/-. Can't account for the rogues though.

Maybe the AI designers are messing with our skills to force an occasional go around. 🙄 Same w/speed but think it's just a fault in the calc. and the uneven variable of our own live aircraft? Anyhow, let's hope Microsoft will put in a proper fix next issue 2006? I would also like to see them give us working windshield wipers while they are at it! Also working TCAS (Traffic Collision Avoidance System.) Wouldn't hurt to be able to request some important informaton or make requests of ATC either like runway for take off? MS2004 will send some or most super heavys to the mid-size runway and we have to go out further to the longest one and sometimes still barely get wheels off in time. 😕 Still a ways to go to really achieve the 'as real as it is?' 😎 I complian about it but I do have a lot of faith in Microsoft. I'll bet they are working on a next generation sim that will blow all of us away.

If anyone chooses to click on the real world ATC link below you will hear the callouts as they outta be in FS9. -???- Speed restrictions and all kinds of permanent interaction that is not yet available for us in MSFS2004COF.

File IFR! VFR you need eyes in the back of your head. Flight following is a service if I remember correctly similar to the UK's flight information service which does not include have to include traffic info. Good controllers give you traffic but it is not a requirement. VFR...your eyes.
Under IFR with a Radar Advisory Service they must keep you seperated.
Good to see you are still alive and able to keep flying!

In FS09, Flight Following in VFR does include traffic information and alerts. But I think it's only a problem when you're in the pattern to land-- if you get a faster plane behind you, you might get run over-- I've never had a mid-air collision (at least not accidentally

). Since strict realism is not my goal, I'll go ahead and do what I have to do to land.

I do fly IFR sometimes, especially if I want to practice flying in bad weather, or to an especially busy airport, and I have had less problems with these speed differences. But flying IFR, you have to be more attentive to ATC; if you miss a turn or something they are liable to terminate your clearance. Flying VFR, I can make course and altitude changes whenever it suits me. 😀

I for one do like to keep it as real as it can be for a sim. I include real-world ATC in the cockpit out of KLAX - Pt. MUGU. As it is being spoken it is heard in the sim. Sometimes I will fly the route from KDFW to KLAX across the black New Mexico and Arizona desert passing all kinds of A/C and I enjoy that. Big time air route across the lower tier of US States as you know. Getting the calls after all that time negotiating the black skies and seeing the lights of LA at about flt. lvl. 12000 is very very realistic. The longer the route is that you fly, the more you will be amazed by the realism of the pattern and approach. Not to mention the scenery. 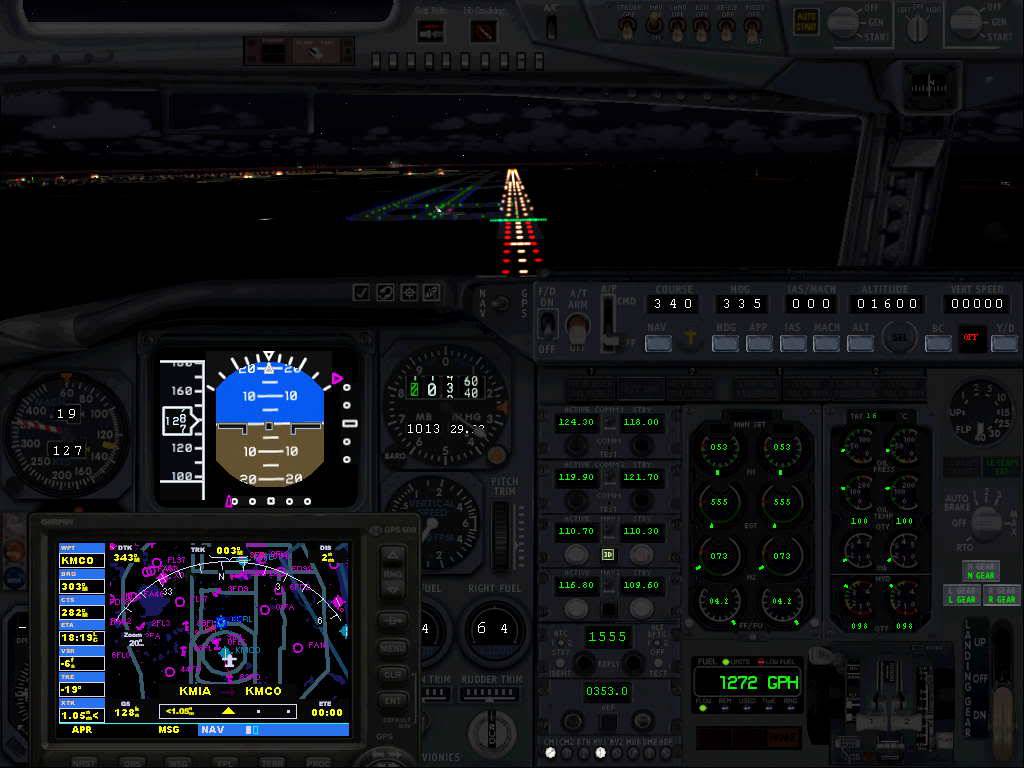 Do you guys realise you can actually save the flight before you start down? If I do long legs, that's what I do.

Do you guys realise you can actually save the flight before you start down? If I do long legs, that's what I do.

It's a good point but going back to the real-world philosophy of sim, real-world pilots don't get the 'save flight' option.