Anyone tried that "wings of power" add on?

yip- sorry, realised that after i did it

They have updated versions (for FSX) for some or all their products.

I would say yes. Where else would you find better world war aircraft for flight simulator

The 3D Lights Redux I think is the FSX one, I haven't had the pleasure but have seen the screenies: Amazing!!!

well the whole lot was worth it,exelent detail and sound! exept two things... every time i take off it tries to steer left, once im in the air its fine, and the spitfires propeller seems to remove trees from the screen, very interesting.

well the whole lot was worth it,exelent detail and sound!

There you go, haven't heard anyone complaining about WoP yet 😀

...about pulling to the left at takeoff, I don't know which aircraft you're referring to and how much experience you have with props per se.

With single props torque will pull you left if you apply throttle too sudden, apply it very gradually and gently.

In the case of multi props, just keep the parking brake applied until you're sure that all props have spooled up properly and are at the same rpm. Gradually apply throttle and release the parking brake. Keep adding throttle gradually and you shouldn't have any problems.

Why your Spit eats up trees I don't know. Can you post a screenie?

And the thing with turning left, that was my first thought but when i tried doing it really slow, with the throttle(using saitek x52)it just kept on keeping on!

but i'm not too worried anyway... i spend most my time in air anyhow.

And the thing with turning left, that was my first thought but when i tried doing it really slow, with the throttle(using saitek x52)it just kept on keeping on!

I've got the x52pro throttle, stick and pedals. That shouldn't be the issue unless you're also using the pedals and they're not centered.

I'm still in the unclear whether you're running FS9 or FSX presently. If you're running FS9, delete the folder Flight Simulator Files which is located in My Documents. In FSX that folder has a slightly different name but is also in 'My Documents'. All that folder contains are your saved flights. Often one of those saved flights has become a little wacko especially if you've made one of them 'My Default Flight'. Some data belonging to that flight will be carried over and can cause all kinds of problems when you create a 'New Flight'.

So I suggest you simply delete that folder, the sim will create a new one when you start it up the next time. You might get an error message telling you that FS cannot find the default flight and will now try and load another one - that's ok, just keep on going.
Now: Just select the Cessna and start a flight from the default location. Make sure you've got your rudder centered and your throttle at idle. With the Cessna, if you just increase the throttle gradually but steadily, you won't experience any torque, you won't even have to touch your stick or yoke, once up to speed, the aircraft will takeoff on it's own.

So if that works nicely, your other props will work nicely as well. Obviously their response to the controls is probably a little more sensitive - remember the throttle.

If despite all of the above things still go haywire, there is another foolproof fix but please let me know which sim you're using and which aircraft you're flying.

I'm running FSX but it's only the WOP planes
In regard to posting up screenshots, do i need to upload them onto a webpage or server or something,before posting it here?(it would be good if i could just take them off my harddrive.)

really the only reason why i didnt like it was because they gave me a P-51 that sucked and i got a better one that was freeware! other than that it was good

I'm running FSX but it's only the WOP planes
In regard to posting up screenshots, do i need to upload them onto a webpage or server or something,before posting it here?(it would be good if i could just take them off my harddrive.)

Ok, since you're running FSX, the folder I was referring to "Flight Simulator Files" will have a slightly different name but serves exactly the same purpose as the one in FS9. Have you deleted it yet and tried out my suggestions?

Note: In case you have saved flights which you don't want to lose, just Cut & Paste that folder to your desktop or any other place where the sim can't fint it at startup instead of deleting it.
The sim will still create a new folder and at a later stage you can go to that old folder and pick out those saved flights you didn't want to lose and place them into the new folder. Of course there's a chance that you'll restore the flight which caused all the trouble in the first place and you're back to square one. It's not worth the trouble... your call.

I think you can take your screenies direct off your HDD with Flashgot and other utilities but I've never learned how to do this. I find it's easy to accidentally delete or move an image on the HDD which means that the post you made with your pic in it will be messed up.

Most of us use PhotoBucket ➡ http://photobucket.com/ -- you can open a free account, that's all you need for our purpose. One of the advantages of uploading the images you want to post to PhotoBucket first is that you're not likely to 'accidentally' delete images from that account and your posts remain intact. 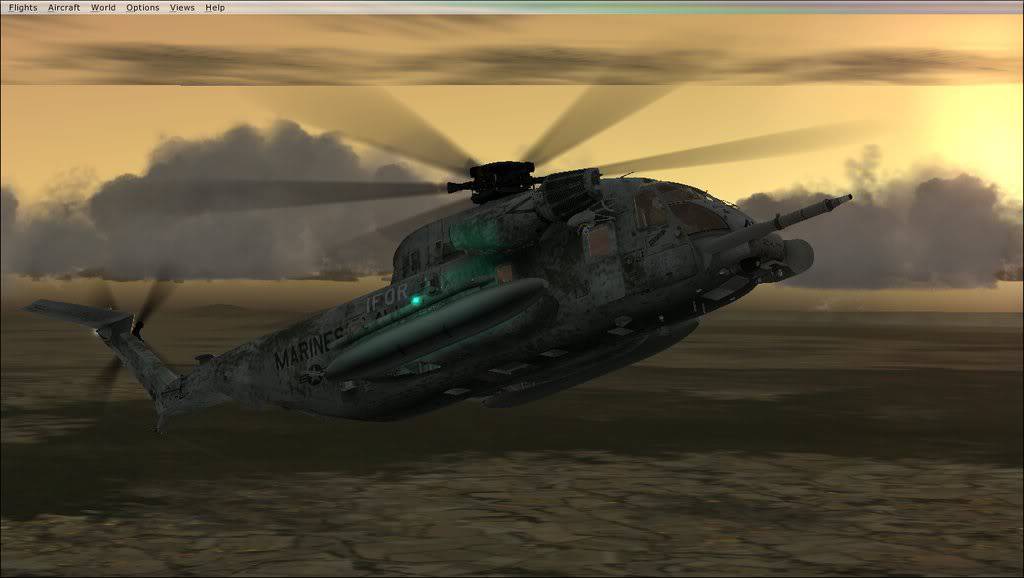 cool thanks for that tailhook!
I tried deleting like you said and it worked!
Your a bloody living legend mate!cheers! 🍻
I'll send the problem spitfire. 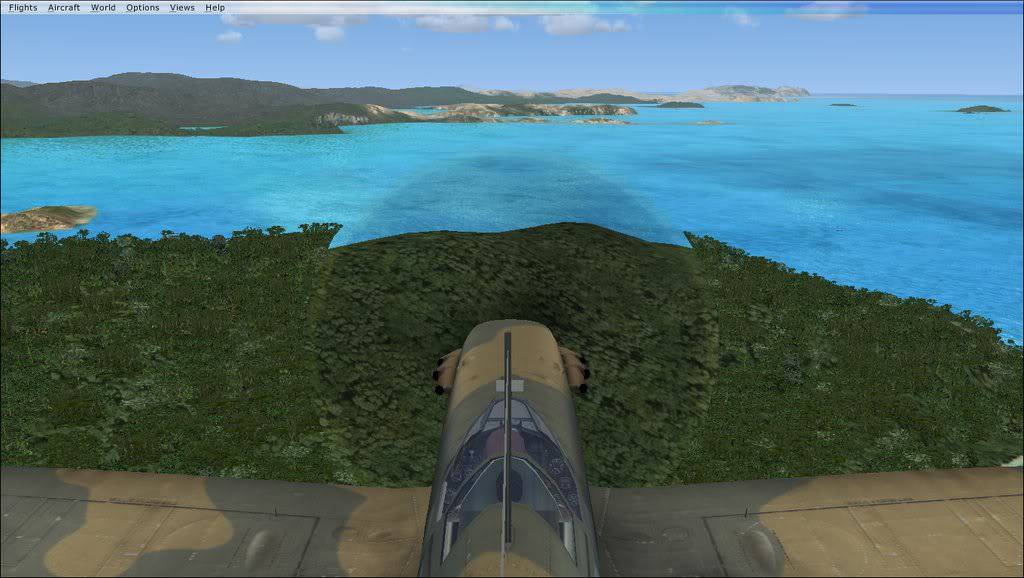 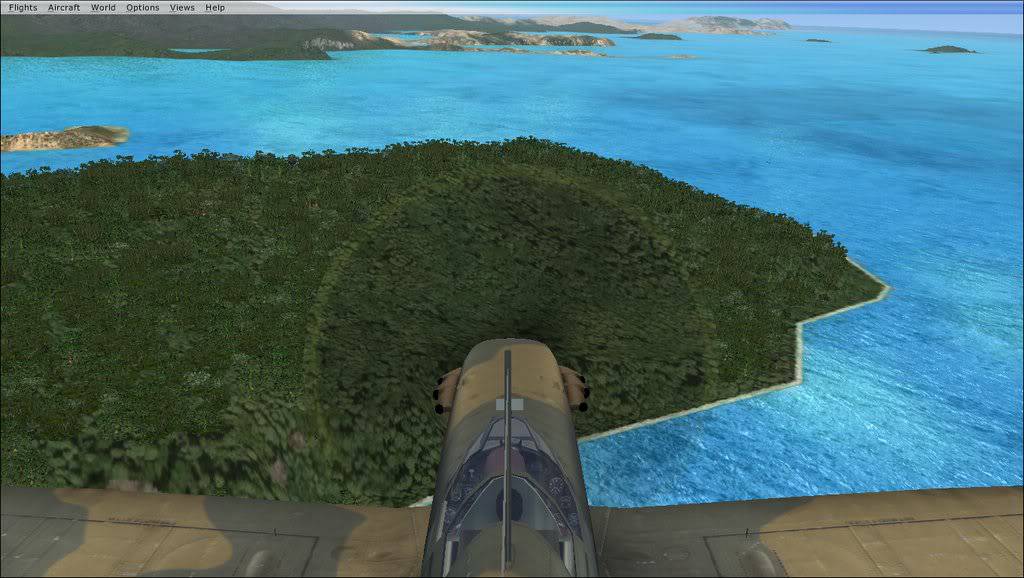 Let me know what your diagnostic is.

Sorry warlord I've never seen that before. I've got the same Spit, though it's the FS9 version and my OS is XP.

I think you mentioned that you got the P-47 as well... does it do the same thing? If it does, try the default Cessna and see what happens.
You could also try the Corsair I raved on about the other day:

I'm suggesting these different aircraft because the Spit and the P-47 are obviously from the same source, the Cessna is a default a/c and the Corsair is a 3rd party freeware a/c.

If all of the above a/c eat up your trees, we'll know at least that the problem is NOT caused by any a/c.

That is good and bad news, bad because I haven't got a clue what causes it. I suspect that the problem has to do with either one of any upgrades such as SP1 or SP2 or an add-on ie. Acceleration... or Vista if that's your OS -- oooor a combination of the above.
I won't mention current drivers for your GFX card as I think you're savvy enough to keep an eye on that without being reminded.

Cool, i'll give that a crack after i get home from work.

Well this is the p40b which also was in WOP, and no issues.
Also tried the defalt cessna, and your fsx corsair, also no issues.
So, its down to the spitty.
Well I'm still on XP, don't have acceleration, so that leaves sp1+2. 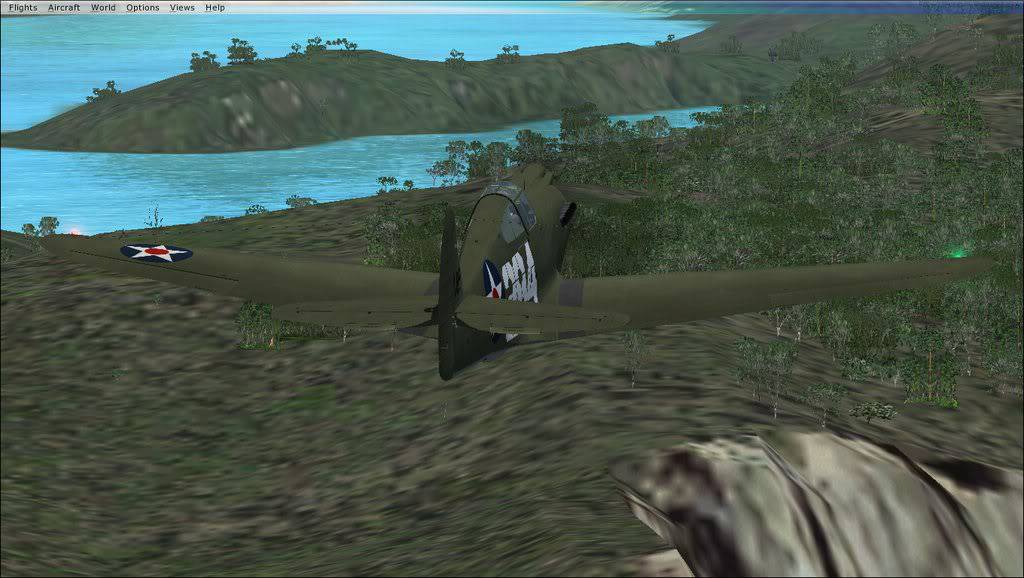