From the developer of the addon:

Hi guys, I've been working on adding guns A/A mode to the Acceleration Hornet, and it is finally ready. I packaged it as a standalone aircraft (F/A-18 Combat Version). This 'Combat Hornet' is equipped with 20mm M61 cannon and has a fully functional air-to-air gun mode found in the real F/A-18. 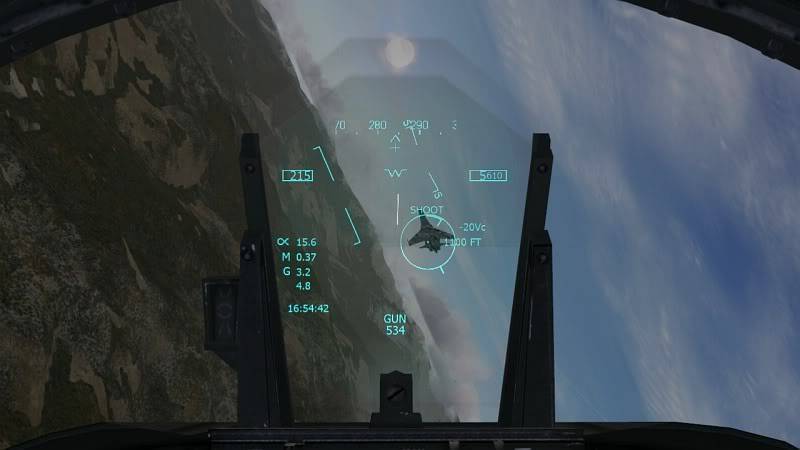 From the two radar modes, the two gun sights and the flying tracers (with precise ballistic trajectory), everything you experience in the virtual cockpit should be very similar to what you would experience in the real cockpit. You will not be able to shoot down other aircraft, but you will receive an immediate indication on your HUD if a shot was successful and a bullet hit the bandit.

The flight model is unchanged from the Acceleration Hornet except for allowing manually controlled flaps and reducing the arresting wire tension for smoother carrier landings. The HUD is an upgrade of the Realistic Hornet HUD by Jivko Rusev and Scott Printz, which allows ILS and TACAN navigation for aircraft carriers. You will also get a couple of additional gauges - an In-Flight Refueling Gauge, PLAT Camera and a Carrier Landing Gauge.

You can find a full description of the features and documentation (including Air-to-Air Guns Manual) in the package.

The aircraft can be downloaded here:
http://www.simviation.com/1/find-file?fileId=34548
Enjoy! 🙂

very very very good m8. This is great and can not stop flying it. I think more weapons need to be added such as an ASRAAM or something would be good