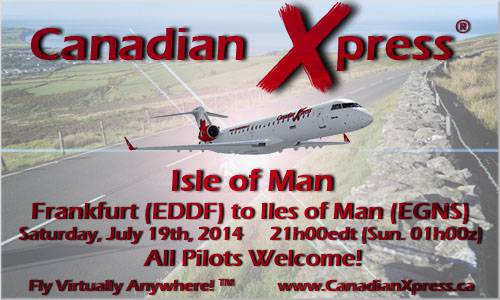 The International Isle of Man TT (Tourist Trophy) Race is a motorcycle racing event held on the Isle of Man that was for many years the most prestigious motorcycle race in the world. The event was part of the FIM Motorcycle Grand Prix World Championship during the period 1949–1976 before being transferred to the United Kingdom after safety concerns.

Today the Isle of Man TT fuelled by Monster Energy is the most demanding road race in World. Run on a 37 mile public road course in a time trial format. No other motorcycle race is held on such a challenging track. A Mountain Course with its seemingly never-ending series of bends, bumps, jumps, stone walls, manhole covers and telegraph poles, makes for an exciting race and very deadly as well. Average lap speeds of 130mph+ have been common over the last 10 years. In 2010 an electric version of the event called the Zero TT was add, showing electric motorcycles can compete at this level, averaging speeds of almost 120mph.

Canadian Xpress would like to invite all pilots & virtual airlines to join us on Saturday, July 19th at 21h00edt (Sunday 01h00z) for our July 2014 fly-in where we will fly from Frankfurt (EDDF) to Isle of Man (EGNS)

This is an open invitation to all pilots no matter what your flying experience to attend this Canadian Xpress sponsored event that will be flown on the VATSIM network.

More information regarding this event including operational details, charts, optional add-on scenery and Canadian Xpress Model Sets can be viewed by visiting www.CanadianXpress.ca or by directly downloading our Fly-In document here.

See you all on Saturday the 19th!