Yesterday afternoon my dreams came true when I got to fly a real airplane!!!

One of my dads mates owns a Piper Cherokee Arrow (that’s the top of the range modle even though it has manual flaps) and he had invited me to take here up for a spin. His plane “ZK-ERE” is based at the “Auckland Aero Club” down at our local airfield- Ardmore Aiport (NZAR)- just south of Auckland city, in New Zealand. 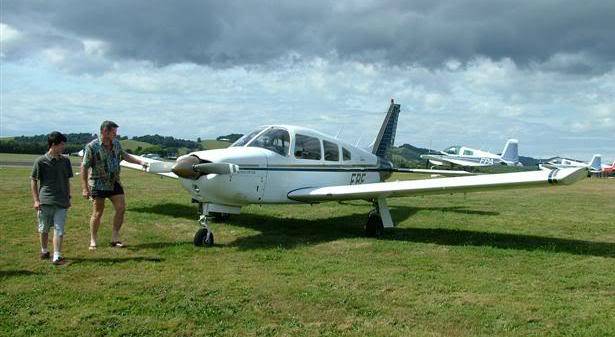 Me and the pilot preforming the pre flight inspection

The pilot took off for us and climbed up to 1300 feet, turned 180 degrees parallel to the runway and flew along the Clevdon valley towards the sea. Once over the bay, we did some steep 45 degree turns which felt awesome. My dad had told the pilot that I'd been playing flight simulator a lot so he asked me did I know what to do, and I said yes, then for the rest of the 1 and a half hours I got to fly around my city by myself! I flew along the coast towards the peninsular that my house and college are on and circled low over head. It was great seeing my house from the air, and we were so close I could even pick out our swimming pool and trampoline in the back garden and all the local beaches, parks, shops, the marina and bmx track! 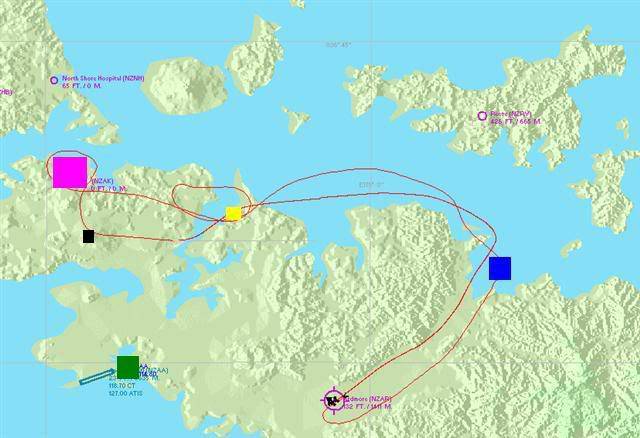 The map above shows the route I flew when I recreated the flight on flight sim. As you can see, the BLUE square is where we did all the steep turns, the YELLOW square is where my house is, and the PINK square is Auckland CBD. The GREEN square is Auckland International Airport. We tuned into their tower and asked for permission to fly in their airspace, they denied us because it was too busy and we had to make a prompt left hand turn at the BLACK square to get out the way.

Anyway, I enjoyed myself heaps, and as you can guess, the real thing is millions of times better than the simulator because you could actually feel the aircrafts response as you move controls around and the turbulence effects rocking the wings as you flew along costal up winds and above hillsides.

Because the arrow was a four seater, my brother and dad sat in the back and took some videos and photos out the windows. I have photoreal scenery of the whole region on flight sim so I’ve have posted several joint pictures below (one being the real thing, and the other being the payware representation. Please excuse the quality of the images- they are still shots from a video that I have shrunk and compressed so that they load quicker. 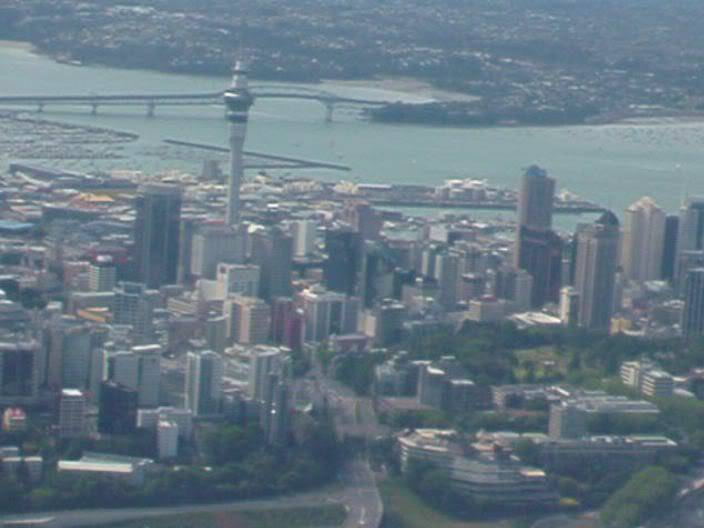 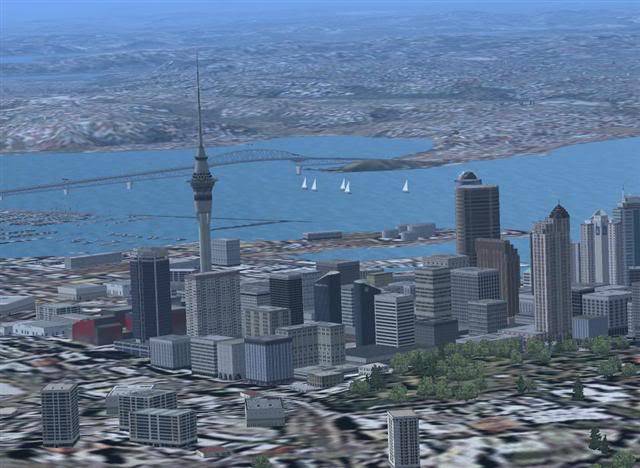 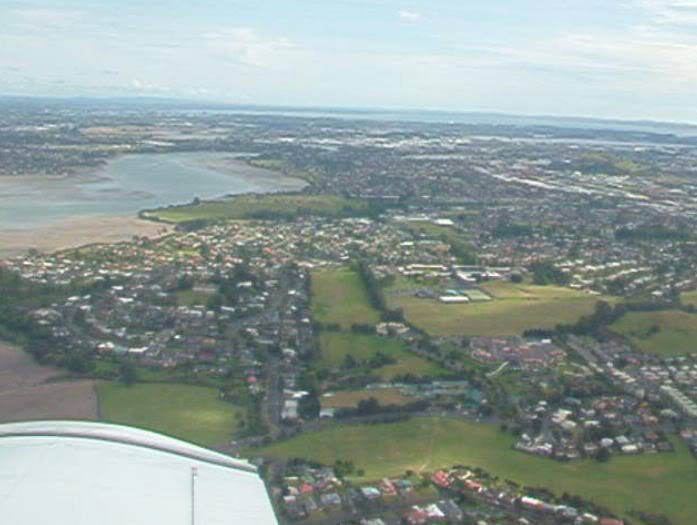 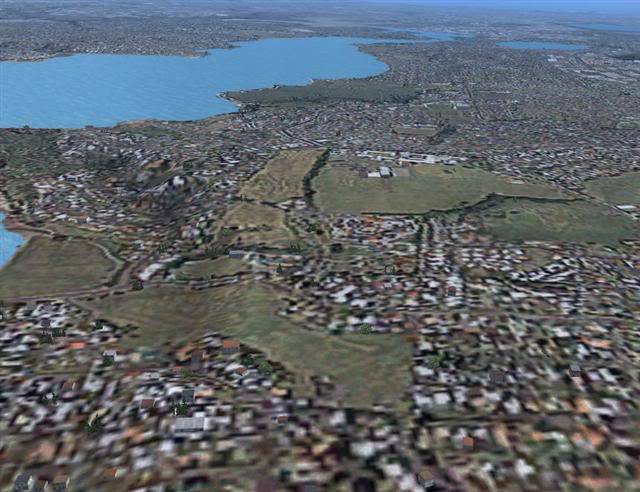 The Suburb of Point England 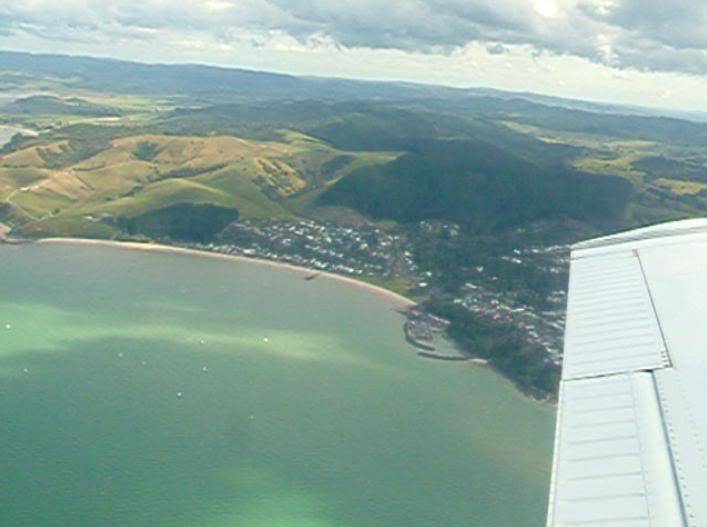 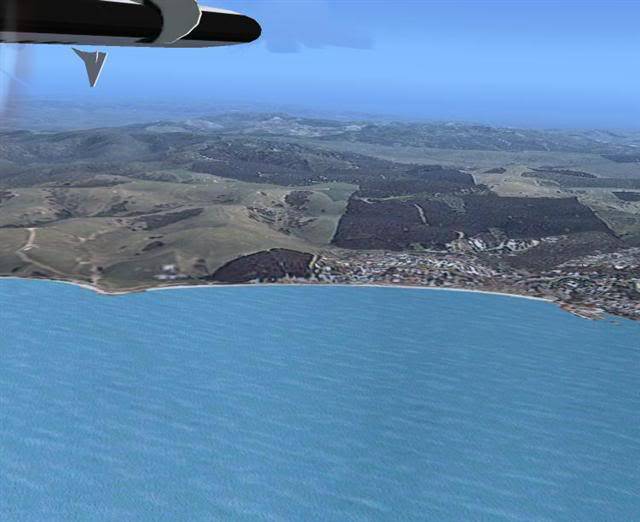 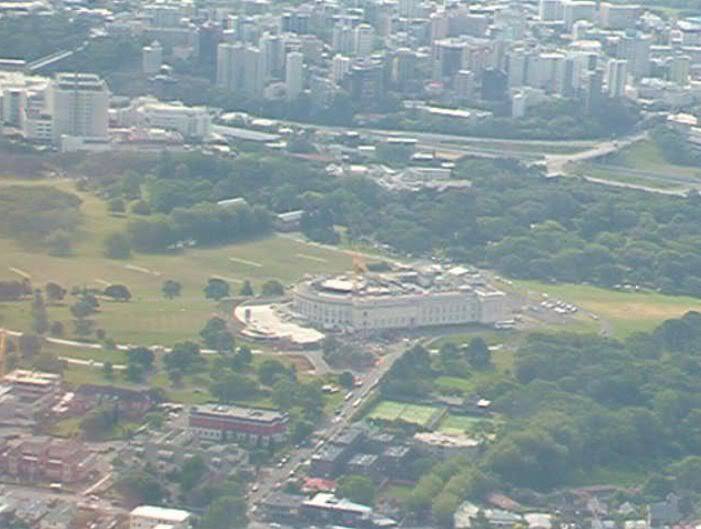 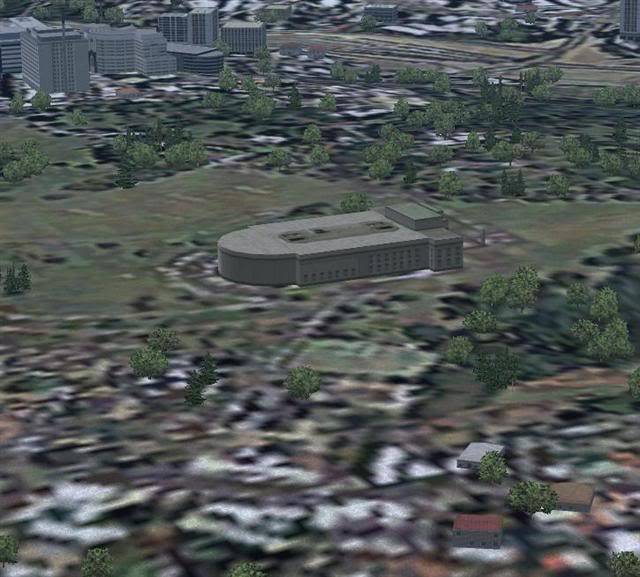 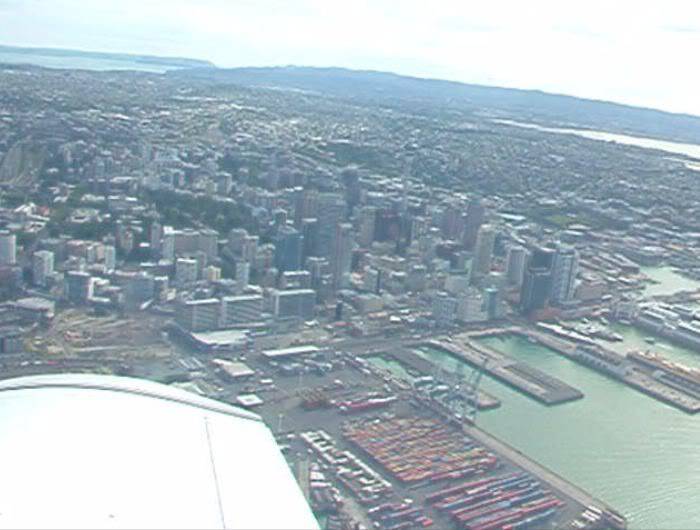 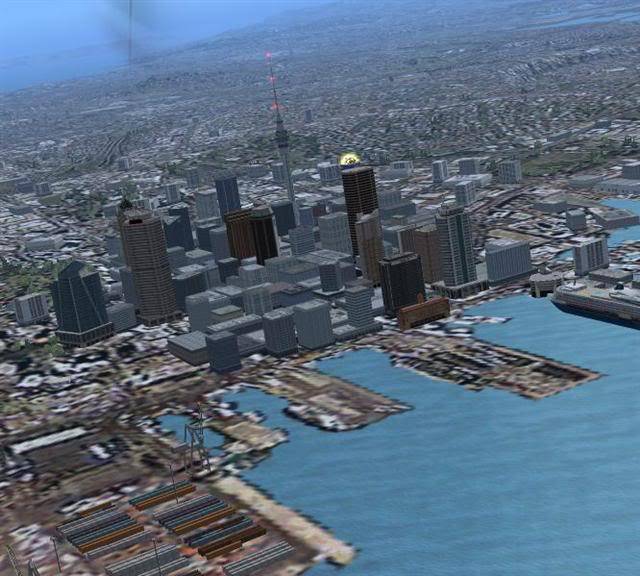 A few things I have noticed: my fs2004 water is crap compared to the real thing, which has cload shadows. This photoreal scenery sux from low down, it looks way better or 3-5,000 feet.

When we landed, there was another plane on finals as well, and although the airstrip is the most busy airport in the country (second busiest in the continent after Australia’s Kingsford Smith International in Sydney) it has no ATC system after being shutdown due to lack of funding. So we had to dodge the low flying Cessna that was landing for the sealed strip and instead of flying the circuit again as my brother had just vomited due to all the turbulence, and we touched down on the adjacent grass strip which was real cool and I never expected to do it! (See the tarmac on the left of the picture below and the grass right infront of us) 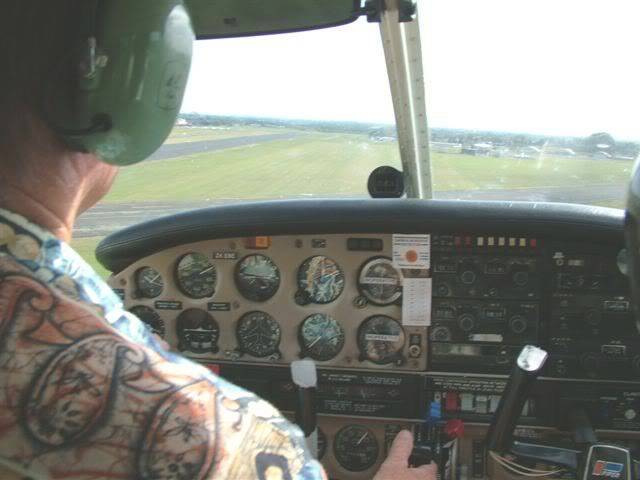 The main reason I posted this topic was to show off to you lot that I had such a great time and share my photos. If you like this photoreal textures in the screenshots, you can buy the ‘Real NZ Auckland City” add-on from here: www.windowlight.co.nz

Also, I want to turn some of these pictures into Splash Screens for FS2004, so could anyone link me to a splash screen template or tell me the font used? And one more thing, could anyone create a repaint for the freeware Piper Cherokee Arrow (You can it from- http://www.simviation.com/fs2004props43.htm ) in this paint scheme below:

Thanks for reading, Please post your feedback below:
By Andrew Underwood

Congratulations, what an exciting time you must have had. I hope you get to do it again soon.
The photos are great looking, thanks for them also.

Oh yer- I forgot to add this picture:

It's a licence plate off one of the Aero Clubs pilots that I saw in the carpark!

I have made a movie which compiles lots of digital photos and video clips from my real flight over Auckland yesterday.

The file size 4.20mb and its a .wmv file that plays in windows media player. You can download it from here:

Congratulations my friend ❗ .Great shots and nice putting with FS ones.

The feel of flying is something the flight sim can't duplicate and it adds so much to the experience.

The pictures are great! And that cockpit... ❤️

Not only a great experience but a great presentation as well Andrew! I feel as though I have seen it myself. Thank you.

My sister is married to an NZer and has just moved her family back to Auckland after seven years here in the states. I hope to one day visit your island and see it for myself.

Awesome pics and write-up Andrew. Sounds like you had a whale of a time! That's a nice looking Piper as well ! 😀 😀 😀

Great pics 👍 Sounds like you had a great time 😉

Hi Andrew -- Great pics. My wife and I spent two months driving around your country a few years ago (South Island only, I'm afraid) and it's hands down my favorite place on the planet. KurtPStevens, you won't regret a trip to this beautiful place.

Andrew can you list your PC specs? I'm curious as to what kind of hardware these images were rendered on (notably RAM, processor and graphics card).

im really pleased you got to live the dream for a day, its the best feeling in the world! Flight sim will take on a new meaning for you now!!

Looks like you had a great time over Auckland Andrew. I have my first flying lesson at HLZ on Saturday so if I get some photos I'll post it on here.

have my first flying lesson at HLZ on Saturday

Sweet- lucky you. Make sure you tell us all about it. By 'HLZ' i'm guessing thats Hamilton Airport? I've flown round there lots on flight sim and its a beatifull area with all the Waikato Vinyards 😉

Anyway- what sort of plane are you gonna go up in, and why r u taking the lesson, just for fun or do you wanna getting your PPL?

Yeah HLZ is like a shortened version of the airport code e.g. NZHN. You will notice this appears on your label things that you put on your luggage bag. E.g. AKL (NZAA), HLZ (NZHN), BNE (YBBN).

The lesson is in a C-152 and is just for fun, but am looking forward to getting my PPL when I am old enough.

kool.
I went up in a cessna 152 before. What company are u going with- do they have a website?

kool.
I went up in a cessna 152 before. What company are u going with- do they have a website?

I'm training with the Waikato Aero Club. Here's their website:

And one more thing, could anyone create a repaint for the freeware Piper Cherokee Arrow (You can it from- http://www.simviation.com/fs2004props43.htm ) in this paint scheme below:

EDIT:
Well well well, guess what? Hinch kindly made me that repaint I asked for! Check it out: 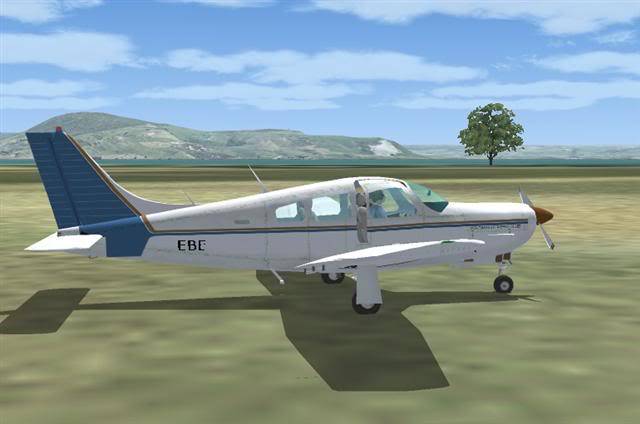 just nopticed i completely missed the blue bit from the back haha. mm, i'll do it again! i've re-uploaded it so check your pm's!

unfortunately this model didn't support reflections (transparency though!) and also the texture is applied using only one side twice - so i couldn;t do the tail number. oh well, hope you enjoyit anyway!

Thanks so much for the updates Hinch- I've posted the new pic above! 😀

Some people get to have all the fun! I think I am jealous.

Sweet! Now you got me looking around to at least get in on a sight-seeing flight here in the Seattle area. There's one I'd love to go on but according to their site they aren't in operation any longer. 😳 The site is http://www.seattleflight.com/ and they had a flight that flew around where I live here in the Snoqualmie/North Bend, Wa. area. Oh well...time to dig through Google and find something.

BTW, I tried to view that video you uploaded and it wouldn't download.

Mithheru, I once read a book about a small cessna taking off from Tacoma Narrows airport in seatlle that was rocked serverly by the wake off a big jet. Both the pilot and passenger were made un-concious and when the passenger awoke, he had blood in his eyes and had been blind. The pilot had actually been killed and he crashed into the water in Peugot Sound...scary stuff! I hope your journy is a little more safe! 😕

Anyway, I will re upload the video on a new server this evening, so check back tomorrow to view it!

Thanks for sharring with us 👏

Thanks TTT, although looking back the sim ones look absouletly crap! lol but I can't be bothered re-doing them sorry!

Please tell me if it works now?

That link works. One question though...was there a lot of turbulence or just a jittery and nervous person holding the camera? I was starting to get motion sickness watching it. 😳

Really good video there. Once I find something here that will take me around the Snoqualmie Valley here I have a video to show in return. I know Seattle and that area would be cool to see from the air, but there are some things here I'd like to see from the air also.

Off to dig through the internet some more...thanks again for posting the vid.

That link works. One question though...was there a lot of turbulence or just a jittery and nervous person holding the camera? I was starting to get motion sickness watching it.

Lol, it was a low-winged plane called a Piper Cherokee, and these sort of planes aren't as stable as high-winger ones like Cessna's that have the main wings mounted ontop of the fuselage rather than the bottem like this one.

And yes, there was a lot of turbulence because I was flying across lots of coastlines with up drafts coming from where the sea meets the land- and sorry about the motion sickness, my brother who was the back seat passenger threw up upon landing 🙄

And yes, there was a lot of turbulence because I was flying across lots of coastlines with up drafts coming from where the sea meets the land- and sorry about the motion sickness, my brother who was the back seat passenger threw up upon landing 🙄

With all that movement I would have been right there alongside him...unless I've taken my Dramamine. I get motion sickness in a car sometimes so I'd have to be awful careful if I get to fly again.