Giant Water Spout near my house!!!

Last night there was a giant 800m high waterspout (Tornado on water) in the Hauraki Gulf, which borders the city of Auckland, New Zealand where I live. 😳

I could have seen it from my up-stairs windows if I had known it was happening but unfortuantly I was in my room playing flight simulator and I never knew it had even occured untill this morning when I saw the front page of the papers:

A dramatic waterspout over the Hauraki Gulf sent dozens of East Coast Bays residents racing for their cameras last night.

The waterspout appeared near the end of Tiritiri Matangi Island about 8pm.

"It was at least 800m high, and as the sun was going down it was a beautiful pink colour. You could see the motion of the water below it.

"It was amazing. It moved over the water and back to the sea and then it dissipated."

A Mairangi Bay resident, who did not wish to be named, said the spout followed "a bit of weird weather all afternoon".

"It was right on dusk so all the sky was nice and red - a bit of a twilight twister, you might say.

"When I looked at it through some binoculars you could see it was stirring up quiet a bit of the ocean out there. It went on for about four or five minutes before it disappeared back into the clouds."

MetService lead forecaster Oliver Druce said a waterspout was basically a tornado over the water. When the funnel got close to the sea it sucked up water.

Mr Druce said waterspouts were not all that uncommon but they weren't often seen by so many people from their living rooms.

The spout would have been caused by a large number of thunderstorms in the area.

He said they were not as destructive as tornadoes.

"They don't pick up debris and cars and things but they do suck up water.

"They're much more harmless than tornadoes, but there's a chance they might catch a boat if you're unlucky."

The map below shows how close I was too it, about 3km away! My home is the red dot, and the area which it happened is marked by a blue dot: 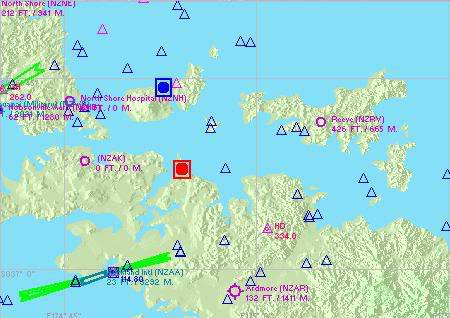 Does anyone know of any Water Spout addons for fs2004? I'd love to re-create it! LOL 😉

In the 32 years I have lived on both the east and west coasts of Florida I have seen several water spouts, none that I would call giants.

I've seen "sand devils" in the desert, none anywhere near the size of that water spout. That must have been a once in a lifetime sight, great picture.

Well, if you want to fly a tornado/waterspout in FS9 and re create it, here you go! lol
http://library.avsim.net/download.php?DLID=70357

Get a canon and shot it Cheeky ...
That was the method sailors are using in last years....

Wow, now theres an idea Greekman! That would be cool to see a 800m tower get knocked down, unfortuantly, I just sold my sailors canon on ebay 🙄 Mabey next time! LOL 😉

And thanks for the link robbier, I will download the file and get a re-creation screenie up ASAP- watch this space!


Wow, now theres an idea! That would be cool to see a 800m tower get knocked down, unfortuantly, I just sold my saiors canon on ebay 🙄 Mabey next time! LOL 😉

Well i 've just bought a used old canon from e-bay from a guy from N.Z....is this you Cheeky?

).You could hung it from your craft and carry it on with you...

Seriously now ❗ ...Is everything allright around you?Any damages? ❗ ❓

lol that must have been cool. I wished you saw it.

Well i 've just bought a used old canon from e-bay from a guy from N.Z....is this you Cheeky?

You have to arrange a World Tour and when you pass from Athens i could give it to you(you have to pay of course ).You could hung it from your craft and carry it on with you...

It's a deal, I'll pop over to Greece in my Cessna to collect the canon and then modify my 2 seater prop it into a gunship, patrolling the Mediterranean in case of any rouge water spouts! lol 😂

Seriously now ...Is everything allright around you?Any damages?

Yep, everything is fine 👍 Thanks for asking mate! Fortunately it never came ashore, and even if it did, I don't think it would have been as destructive as a tornado, just a scary sight

Anyway- I download the 6mb spout file and installed it, and went to try it out and the game crashed, then asked me if “Would I like to restart flight simulator 9.0 ?” even though I have the 9.1 update! Anyway, I quickly deleted it but thought I would share a screenshot that was included in the zip file for the sake of it: 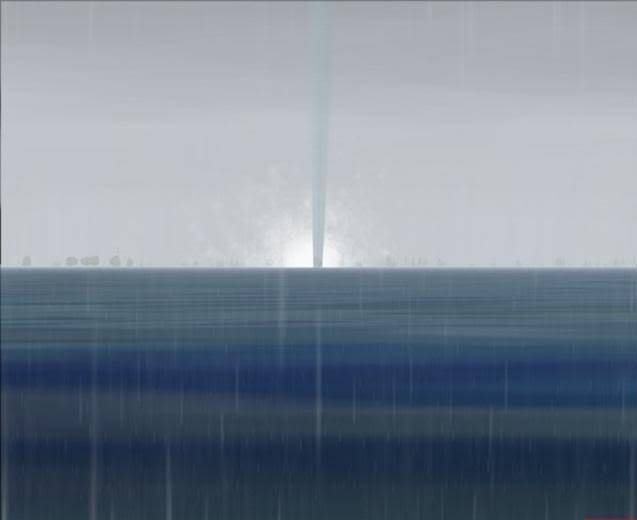 Im happy that everything is allright.
Your screenshot is amazing.I would love to flight beside and maybe inside it... 😀

As far as about your Canon craft...in the price of canon i include one barel of powder for free. 😉

Your screenshot is amazing.I would love to flight beside and maybe inside it...

LOL, I didn't take it Greekman mate! It was included as a preview in the zip file I downloaded from Avsim!

I'd love to fly in it too! 😉 That would be some crazy turbulance!