And thats all I have to say about that...I REALLY hope this is nothing like what the final product is going to be, because if it is, I'll stick to my payware'd up FS2004.

It will get much better after this. I hope anyways....the game crashed 2 or 3 times when I pulled up the 2d panel. It had really slow framerates at first then it kinda warmed up to 30+fps...really weird.

I am not impressed at all. It has been how many years and I see the same game. I am a game programmer and the changes they have made would take a few months at most to complete. What you see in the demo is what is going to be released in a few months. They will spend probably about 4-5 more weeks making more plane models and fixing up some existing models. The main systems for the game are already there and will not change in a few weeks. They used the same window system for the game and just changed textures. I could have done that in a few minutes. I certainly will not be purchasing this game.

I think they spent to much time on the water textures and not enough on how the land looks. It doesnt look like it goes together.. The vehicles driving on the roads have got to be a joke.. Some of them were just axles and wheels 😂

I highly doubt your going to see anything different from the demo. They finalize everything in the game at least 2 months before it is released because they need time to make thousands of copies of the sim and ship them around the world. Personally, i wouldent mind if they delayed it to make everything better. They shouldeve let out a demo a long time ago to see peoples reactions and see what they shouldeve improved.

IMO i think the only reason they made the demo set on a couple islands was so they could make people not think about how the land looks and see how great they made the ocean look. Thats pretty stupid and cheap for microsoft to do. 🙄

When you installed FSX it gave you the option of reading the readme file. I suspect you may not have read this so I shall provide it for you. It is clear FSX is not complete.

Major Known Issues
At the time we created this demo version, Microsoft Flight Simulator X was not yet complete and work is ongoing.
Setup
§ The Flight Simulator X demo version is not compatible with the Flight Simulator X beta versions.
Aircraft
Some aircraft in Flight Simulator X demo may not be finished.
§ Some of the incomplete items, such as untextured aircraft models and animations that don’t work, are obvious and will be implemented before the product ships.
§ You may also notice that the “level of detail”, or LOD models are not completed—as an aircraft moves away from you, it will abruptly swap to a low-detail model.
Scenery
§ Taxiway and apron textures will sometimes exhibit regular patterns of mismatched textures, especially at the intersections of different surface types. Taxiway fillets may appear with texturing different from that of the intersecting surfaces.
§ Airport boundary fences currently block out views of terrain and buildings behind them.
§ Autogen content (generic bridges, buildings, trees, etc.) and placement are still in progress.
§ Autogen exclusion is currently not working properly, so you may see trees and buildings appearing on airport polygons.
§ Some scenery objects in this pre-release demo version are not complete and may display as black or incomplete shapes. This will be corrected in the final product.
Configuration
§ The retail version of Flight Simulator X runs on Korean, Japanese, and traditional Chinese Microsoft Windows operating systems. This demonstration version of Flight Simulator X will not run on Korean, Chinese, or Japanese versions of Windows.
§ After changing time of day or location in the simulation, terrain textures occasionally won’t update, or some textures will change to black or bright colors. To resolve the issue, restart a flight. Cycling views will also occasionally resolve this problem (press S).
§ Anti-aliasing is not working on RADEON X300/X550 series cards.
§ Anti-aliasing does not work for the Free-Flight aircraft preview window for any configuration.
§ Windows in Virtual Cockpit mode may not be transparent in video cards that only support shader 1.1.
§ CH throttle quadrant's range of motion is currently limited.
§ If you are using an Xbox 360 controller for Windows with Flight Simulator, make sure you plug it in before starting. Plugging an Xbox controller in while Flight Simulator is running may cause problems with control assignments.
§ Flight Simulator will not render in windowed mode with Windows Vista Aero/Glass enabled. Disable this feature in order to use windowed mode on Vista.
§ Bloom effects are not functioning.
§ TOSHIBA: TECRA M4 users may experience a blue screen when altering screen resolutions.
§ Shader Model 3.0 card users (GeForce 6100 and ATI Radeon X1300) should update their drivers to see self-shadowing.
§ The setup repair function is not working properly. If you have problems with your installation, please uninstall and reinstall Flight Simulator.
Missions
§ The missions are still a work in progress and are currently being tuned. No known bugs should prevent you from flying the missions in the demo.

FSX crashes(resets pc) with SLI enabled, and in non sli it runs at 15 FPS in max detail, and looks like a some sort of google earth plugin when you get the frame rate to 30FPS.

No one in their right mind would release a demo as

as this,I suspect the design team will be fired and the release date put back to mid next year. >: (very FN disapointed, I paid nearly 1k for my vid card with FSX and Oblivion as justification for it).

This is an example of MS shooting itself in the foot. Did they really think that releasing a buggy demo would make people want to run out and get the product when it was released?

Geeze, well, this is lousy, it looks worse then FS9 on my pc. I tried maxing out all the settings, but it sure didn't accually do it. If I had a better PC I bet it would look great. But I bet you'll need a super computer to run this thing.

I have AthlonXP 64 3200, 2Gb ram, 2x7300GT in SLi and I am not having any issues (yet) apart from some of those in the readme file. I am telling you this to help restore a small bit of faith. Only those with problems are posting.
FPS is limited to 20FPS as I can't find the setting to adjust this as yet.

As always in most games there will be issues. FSX will be made right. FS9 needed an update to 9.1 to iron some glitches and a dare say FSX obviously needs some work before it is released.

Some will have problems and some won't. Those that do will be mighty miffed which is 100% understandable.

I figured that it would be bad. Yesterday was like a shark feeding frenzy of people downloading. All of the hype, countdown and people saying " I want it now!" Well here it is, you've got it. I think my friend will be as disappointed as I've read everyone else is, I downloaded for him but I'm not going to run it. I'm sure the production version will be much better. 🙂

I think they have done a good job with this game.

If you want the game to look better turn the settings up!!!

Im getting 20FPS and it ant crashed yet.

FSX crashes(resets pc) with SLI enabled, and in non sli it runs at 15 FPS in max detail, and looks like a some sort of google earth plugin when you get the frame rate to 30FPS.

No one in their right mind would release a demo as shitty as this,I suspect the design team will be fired and the release date put back to mid next year. >: (very FN disapointed, I paid nearly 1k for my vid card with FSX and Oblivion as justification for it).

replying to my "google earth plugin" and other rants, I have to say after turning the water detail down to 1.x, it's fixed the frame rate issue and cSLI crashes, I have maxed out all the custom sliders and it runs with out incident. So my advice for any other 7950GX2 users is to wind back the water detail slider to 1.x and give it a try.

replying to my "google earth plugin" and other rants, I have to say after turning the water detail down to 1.x, it's fixed the frame rate issue and cSLI crashes, I have maxed out all the custom sliders and it runs with out incident. So my advice for any other 7950GX2 users is to wind back the water detail slider to 1.x and give it a try.

FSX looks and acts like it's just FS9 with some fix'um up'ums.

FSX looks and acts like it's just FS9 with some fix'um up'ums.

To change the Frame Rates from 20. Simply go into display settings. It is in the same section as the control to change your resolution.

and it only chugs a little withe everything maxed. I think soon I will be buying another gig of ram and a Geforce 7900 GT.

At first I was disappointed tell I read the readme that answered all my questions and the final product should be much better.

Sad thing is my FS9 with a few add-on's looks 40times better.

Because FS9 is a finished product and FSX is not.

Sad thing is my FS9 with a few add-on's looks 40times better.

How many time do you intend to state the obvious? The damned thing is a subset of an early beta. It isn't complete. It isn't finished. It isn't supposed to be. Did you expect that MS would provide a production quality free toy?

Demo's shouldn't be sub par creations, they should be something that makes people want to purchase the product.

I was just dissappointed. The planes are spectacular, scenery isn't that great, water is appaulingly unrealistic.

But thats just me. Just doesn't live up to the hype.

Will I buy FSX? Yes.

Actually, I agree. Except for some minor strangeness, even the FS9 a/c look better. This is especially true with regard to flap and gear movement.

I agree it was a mistake to release such an early build as a demo. I suspect they did it to prevent people from using the demo for the next few years, rather than buying the product. It would have been much smarter to release a time-limited demo that really showcased the product. 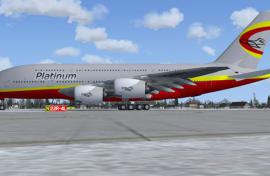