infrared deicing- whatever next

Olso International Airport has just buit Europe 1st 'infrared deicing' hanger! Well I thought it was kinda interesting and you can read the article I found here on the offical website here: http://www.osl.no/index.asp?strUrl=//templates/applications/internet/showObject.asp?infoobjectid=1018333&menuid_1=&menuid=&topExpand=&subExpand=&pid_1=&l=&cAD=1000123

Would love an English translation pls!

Just another one of my many hidden talents

Anything else you need translated??

To get the english version scroll down to the bottom of the page and click 'Utskriftsvennlig versjon'.

you see instead of saying English version in a foreign language, surely it would make much more sense to say "English Version" in Englsh, then possible, just possibly, we might know what to look for! 🙄 🙄 🙄 🙄 🙄 🙄 🙄 🙄 🙄 🙄 🙄

you see instead of saying English version in a foreign language, surely it would make much more sense to say "English Version" in Englsh, then possible, just possibly, we might know what to look for! 🙄 🙄 🙄 🙄 🙄 🙄 🙄 🙄 🙄 🙄 🙄

I was thinking the exact same thing Micah, because thats what they do with webpages that have english as their primary language.

Are you guys blind -lol- The main menu bar across the top of the page says 'English' so you just need to click on it for the translation- Easy! 😀

For those of you too lazy to do that, here is the article in english:

First in Europe to use infrared deicing

SAS Ground Services Norway AS (SGS Norway) is to be the first ground operator in Europe to test out infrared deicing of aircraft. A hangar for infrared deicing is currently being rigged up at Oslo Airport. 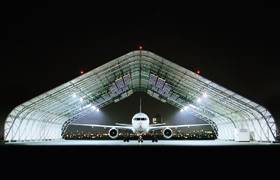 Together with Radiant and Oslo Lufthavn AS, which owns and runs Oslo Airport, SGS Norway will test out the use of infrared heat waves to deice aircraft.

Aircraft deiced by this method taxi through a specially built hangar in which snow and ice are removed by heat waves. Infrared deicing reduces runoff of the chemical glycol by around 70%.

“It is part of our strategy of testing new products within the supply of the ground services, so that we can offer our airlines more efficient, economic and environmentally friendly products in the future,” says Ola H. Strand, Managing Director of SGS Norway.

The deicing hangar is expected to be taken into use for testing early next year and will supplement standard deicing for the rest of the winter season.

“Oslo Airport is a modern airport and considers it only natural to adapt to our customers’ new ways of thinking. We consider the reduction in chemical runoff provided by the new method to be a positive factor and see this as a valuable contribution to our work on looking after the environment at the airport,” says Nic Nilsen, Managing Director of Oslo Lufthavn AS.

“We have had good experience in the USA and are looking forward to starting up infrared deicing in Europe. We are pleased that SGS Norway and Oslo Lufthavn are positive towards taking this new method into use,” says Svein Utkilen of Radiant.

With traditional de-icing (step one), hot water or a mixture of hot water and hot glycol are used for the de-icing process. During step two (the anti-icing process) a cold glycol mixture containing about 50% glycol is applied.

The glycol is designed so that most of it loosens from the fuselage and wing surfaces during take-off.

Glycol consumption
Oslo Airport uses an average of about 600 litres of liquid during de-icing operations, of which about 100–120 litres of pure glycol are used during the de-icing stage and about 25–30 litres during the anti-icing stage. Consumption varies widely according to temperature and weather conditions. 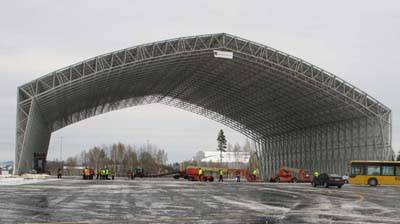 US airports are reporting an up to 90% reduction in glycol consumption with the use of infrared de-icing. Based on existing procedures and routines it is estimated that Oslo Airport could potentially reduce its glycol consumption by 50–70% on aircraft treated with IR. This is one of the questions that the ongoing project will provide answers to.

The overall effect of the IR system will depend on how many aircraft the system can handle. This, too, will be verified in the ongoing project.

In addition to the operating impact, the airport’s main objective for the project is to evaluate primarily the local environmental impact of the system. At Oslo Airport, about 80% of the aircraft de-icing fluid that is used is collected. This fluid is treated and / or used in other operations in a environmentally satisfactory manner. The remainder of the de-icing chemicals blows off the aircraft during take-off and is filtered in the soil along the runways. For environmental reasons, It is particularly desirable to reduce these amounts.

With the use of infrared de-icing, only de-icing chemicals will be used on wing surfaces and tails, while the fuselage itself will be less exposed to chemicals. There is reason to assume that compared with traditional de-icing this will cut back the dispersal of chemicals along the runway systems. Oslo Lufthavn AS (OSL) therefore wants to test whether the rate of collection can be increased and dispersal further reduced by the introduction infrared de-icing.

I was more intrested in the pictures... 🙄

Its ok...I transalate it by my own from This Scandinavian(i think) Language to Chineze and then to Greek...Peace of cake... 😉

ahh, now it makes sense and i understand - certainly sounds quite cool, now that we have got to the bottom of it.