go to the lessons... it is all there

I'm glad you asked that because many people don't realize what it is, the name is deceiving.

The ILS or Instrument Landing System is a radio navigation air used to find the runway in poor visibility. It is designed to get the aircraft to a point from which the pilot can see the runway environment and land visually. Normally this point is 200 ft. AGL and 1/2 statue mile from the runway for a normal (CAT I) ILS. Contrary to the name, it does not land the aircraft*. It is often used with the auto pilot(AP) but can be flown without the AP. There are special charts that describe the correct altitudes, headings and missed approach instructions for the ILS called approach charts, each runway has a different chart. In Flight Simulator, the ILS course will still guide you toward the runway below 200 ft. but you will strike the runway with the descent rate of the approach(400-800 FPM) and may or may not work. In the real word, the Glide slope is not constant below 100 feet and flattens out or distorts on the normal ILS. That's why there's a limit to how low you can descend without seeing the runway environment.

In Flight Simulator, there is only one type of ILS but in the real word, there are CAT I, CAT II and CAT III. CAT III having 3 subparts. The difference is based on how low you can descend and what visibility is required to legally fly the approach, the lowest being CAT III. The only way to determine the type of ILS is to check the approach chart for that runway or research the official airport information such as the Airports/Facilities Directory(A/FD)(US airports), not readily available to non-pilots. They are flown with the same basic technique. The signal strength, terrain, missed approach options and approach light and runway lighting configuration/availability determine which type a particular runway will have. Many airports don't have an ILS at all. The ILS allows you to descend to the lowest altitude of all instrument approaches but it is only one of many Instrument Approach Procedures(IAP). There are Localizer, VOR and GPS approaches. There are NDB approaches and of course the visual approach, you don't need an ILS to land if the visibility is good.

*Flight Simulator-There is one exception to the" doesn't land the aircraft" statement, that's Auto land. Default aircraft don't come with Auto Land. You would have to download the feature, download a panel with the feature or use a aircraft that includes the feature. Then the aircraft will land on it's own once you do the proper procedure. Auto Land will flare the aircraft before touchdown via the radar altimeter.

Real world- Auto land is not done by most airline pilots or aircraft. It also can only be completed on special(CAT III) ILS systems that are not at some airports. Small aircraft don't do Auto Land. It requires special training for the crews and more maintenance inspections for the aircraft. Even if the type of aircraft does have the capability to utilize Auto Land, the airline may not have the certification for the operation. Weather conditions that require Auto Land are rare and may only occur a couple of days during an entire year, excluding London(Fog).

The ILS contains two signals, one for vertical guidance and one for lateral guidance. These signals are very directional. If you approach the runway/airport from the wrong angle, it will not work. You have to use the correct intercept to get onto the ILS properly. It's not just setting the right freq. and buttons but aircraft position, altitude and airspeed. Range of the ILS is also limited, expect about 25-30 miles max. You have to use the correct technique so that the instrument indications will make sense. Aircraft that are equipped with FMC/FMS systems don't use them to fly the ILS or Localizer(LOC) approaches. Normally the FMC/FMS is used to fly GPS approaches and may be used to fly VOR approaches. The ILS or LOC approach is often loaded into the FMC/FMS only for situational awareness.

read all about it here: 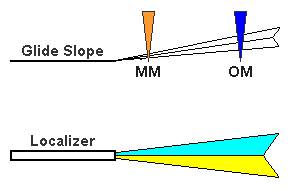 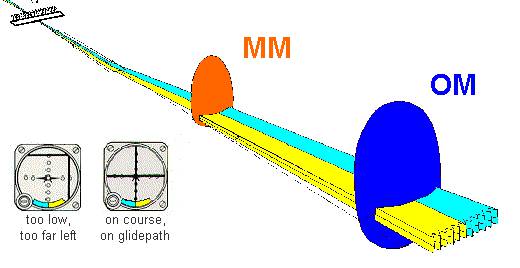 It was very satisfying to go through the lessons in FS2004 & come across the ILS system.