I know this forum isn't germane to this non-FSX query, but please indulge me just this time and I won't make a habit of it.. I'm hoping someone here has unbiased experience with this kind of flight sim.

I'm on the verge of plunging deeply into Radio Controlled (RC) flying, but before spending those big bucks just to break it in the first 5 seconds, I'm thinking "SIMULATOR TIME"! And too, it's so windy out here this time of year I think it would be hard to get off the ground much.

So has anyone used RC simulators on their PC?

What started me on this google was the idea to use my keyboard, CH stick & rudder pedals to control an RC, but that doesn't look likely. Seems to be possible to use an RC controller box (with usb port) to fly FSX though.

I've wanted to get into RC flying for awhile! I may be wrong, but I believe that there are learner planes out there that are nearly indestructible, or go too slow to really hurt themselves.

I've heard of people using the tower view in FSX to simulate flying an RC plane, but that's about all the insight I can offer ya. 😂

I tried flying the J3 cub (it being the slowest) in tower view, that's HARD! Even trimmed out for level hands-off flight it'd difficult to make a coordinated turn. There's just no visual cues pilots are used to, especially when the plane has flown out of sight! I'm getting a lot more respect for RC flying.

I think I'd better buy one of these RC simulators before getting deeper into the hobby.

I have Real Flight G2 Light...was pretty good. I haven't messed with it for a while now.... I used it to train myself to fly my r/c helicopters...and I still get too scared to fly them!!!!

Speaking of those....gotta prep one for some flight time, just too damn hard to clean the engine while its in the frame..... 😕

Yesterday I went to Hal's hobby warehouse where they have a Realflight R/C Simulator G4.5 setup. It looks so much better than using FSX as a R/C simulator and even comes with a R/C controller with a USB cable! It OUGHT to be better at $220us. I'm about to install it right now after updating my nvida driver. Ya know, I bet I fly this simulator a lot more than any R/C plane I might buy.

Later
Whooa,, check this out, FSX likes the R/C controller!!! 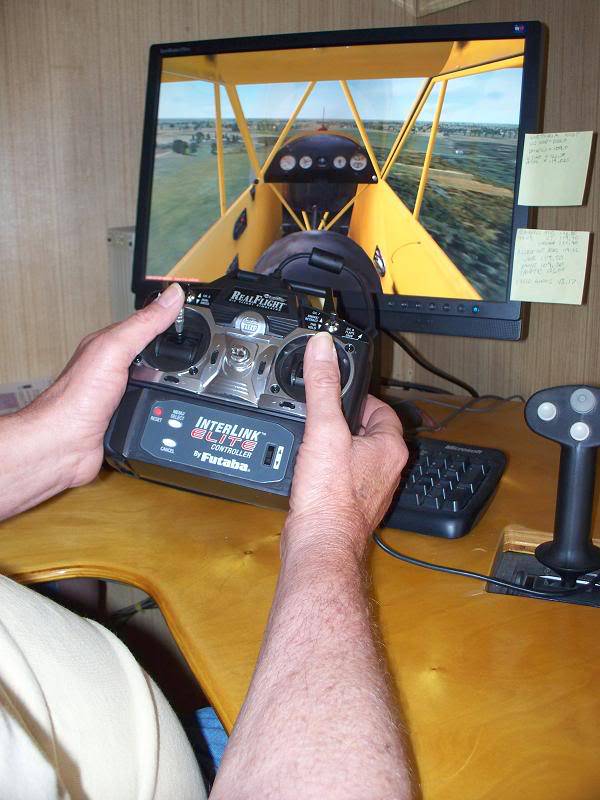