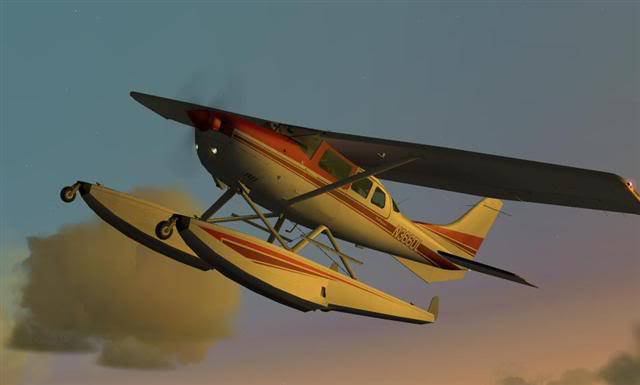 I have just purchased Carenado’s Cessna 206 Staionair full-pack, and as wonderfull as it is, I just have a few concerns and questions about it's preformance that I need some help with:

1) Shift+E+2 opens the rear doors, which work fine on the Cargo and Wheels model but on the Amphibious model, they won't open when I press that combination, only when I put flaps down one notch (F7) do theys swing open 🙄 Why is this, and how can I fix this?

2) When I use autopilot ('Z') the altitude remains constant, but the heading keeps turning to the right 🙄 Why is this, and how can I fix this?

3) As I mentioned in a previous post, the altitude gauge shows a different height to the red line of text along the top of the screen (Shift+Z) and every time I start a flight, I keep having to press 'D' to reset the gauge 🙄 Why is this, and how can I fix this?

4) I can only open the rear doors (In Cargo and Wheel modles, Amphibious is screwed up) by rasing the flaps back to thier original position after landing, is this normal?

5) I couldn't find any manual or anything that came with the download, where can I find one that list's all the clickable objects in the VC and what key combinations do what, like opening the windows and stuff?

The door problem is easy to fix. Rather than trying to get the "Shift+E+2" to work properly, just re-assign the "open main exit" key (I believe that's what it was called) to "D." Now all you have to do is hit D+2. I've never had problems with doors from any of my aircraft after this.

As far as opening the rear doors, I believe you should have to reset the flaps to original position. I'm not an actual 206 pilot by any means, but just from looking around in the cockpit view with flaps down you'll see that they do overlap the doors by a bit. I didn't realize they were that sensitive to details!

The manuals should have been installed to your start menu. If they weren't, you can either try to re-install or email Carenado to get a zip file with the PDF's. I didn't have to do anything special to obtain them. -- Until then though, I'll give you a hint about the clickspots in the VC. To bring up the numbers over the guages, simply click on the center of the guage. That should work with a little practice. To bring up a 2d panel of the guage in question, I believe that clickspot is in the upper right corner of the guage.

As far as the autopilot trouble, it could be how you activated it. Remember that there's the autopilot guage on the main panel, but also on the bottom of the radio stack. If you picked nav-mode without having something dialed in, it could possibly be the plane's attempt at tracking nothing. Also, if you were lucky enough to have the altitude hold constant with autopilot, bravo, because I don't think there's an altitude hold feature on the autopilot!

Having to re-set the altimeter at the start of every flight is perfectly normal. Since you obviously load up in different barometric conditions, your altimeter setting won't be the same from flight to flight. Every so often your altimeter's default setting might match the weather outside, but that's very unlikely. You should be doing this for all aircraft when you load up.

Thanks for your replys guys, problems solved!

Original Grudge, it turned out that the only thing making my plane bank was that I had nav-mode selected instead of GPS on my radio stack, just like you suggested!

I also notieced that the flaps where overlapping the rear doors when I tried to open them, and at first thought nothing off it, but soon after realised that Carenado had put so much detail into this model that I had to pull the flaps back in! Money well spent I think!

And CRJCapt, thank you for explaining the autopilot system to me. The reason I am so clueless about the instruments is because I usually fly on "Spot Plane View" and use the red line of text at the top of the screen as a guide, but now, thanks to you I undertsand what to do inside the cockpit, Thanks very much for the help 😀

Your AP is the Navomatic 300A single axis AP

I still manage to hold my altitude with autopilot, by hitting "Ctrl+Z" but if the autopilot has only a horizontal axis, prehaps Cardenado didn't put as much detail into the model as I thought...?

And as for the Amphibious model rear doors, I tried them again today and they work fine. I must have pressed some combination of keys by accident yesterday in order to have made them open like that.

So, now questions 1) 2) 3) and 4) have been solved, and now 5). I had not even checked my Start Menu since I installed it, as I have spent all my time on Flight Sim, lol. I read through the PDF manuals and checked out all the clickable gauges and windows and stuff in the cockpit 👍 Its neat!

I just have one last question now, that I couldn't find the answer to with the manual. It says on the official site:

How exactly do I "toggle" the camera view to the back seats, cargo bags, the wing and landing gear?

Thanks again for for your help guys!
CT

Glad to hear it's all working out! I'm not sure about the camera mode though, it hasn't even occurred to me to try that out!

I fly the Piper Cub alot. It doesn't have anything close to a AP but it will maintain altitude if you hit [Ctrl+Z]. I think that it's a feature within MSFS 2004 to help you and not a inaccurate item by Cardenado. I don't know how to toggle the different views. Glad to see you've got it working. Looks like a good aircraft.🙂

CT, there is one other problem that I see in the screenshot you provided.

I noticed that on mine, but it does not effect performance.

Hi Crash,
I raised them myself in that screenie, but have also noticed what you are speaking about, but it dosen't really make a difference.

I know this is a little late, but I found the answer to one of the original questions:

How exactly do I "toggle" the camera view to the back seats, cargo bags, the wing and landing gear?