Many fs2004 enthusiasts I encounter in forums like these and in flight sim related news groups seem to favor the business class and commercial airline jets. I, however, have always been partial to small prop planes...especially of the single engine variety. I've often referred to myself as a "simulated bush pilot". This refers not only to the types of terrain I like to fly out of, over, and into, but also to the types of planes commonly used for this type of flying.

In my never ending quest to find interesting and fun add-on small prop planes, I've come upon a particularly nice little plane, and I'd like to encourage you to give it a try (yes...even you "big bus" drivers out there!). 😉

Today's happy addition to my hangar has been the American Champion "Super Decathlon 8KCAB" for fs2004, by RealAir Simulations.

This little plane is often used as an aerobatic trainer, and RealAir has once again, in their tradition of creating very accurate flight dynamic models, offered those who enjoy true "hands on" flying a real treat!

Many of you - I hope! - do already have the freeware enhancement of the fs2004 default Cessna 172SP by RealAir Simulations. If you don't have this enhancement of the C172's flight dynamics, sounds, and graphics, I urge you to do yourself a favor and go get it. It's free, after all! Okay...back to the Super Decathlon...

As I said...The Super Decathlon is for those who enjoy a truly "hands on" simulated flying experience. As part of this very accurate model, there's no auto-pilot, and the plane does not have flaps. It's controlled with a stick in "real life", so this has given me the opportunity to put my long neglected joystick back to work. Everything in the Virtual Cockpit is "clickable", so you can perform all tasks from starting up the "cold" plane, to flying, to shutting everything down from the VC. RealAir recommends always flying this plane from the VC.

A small note on the VC:

I prefer flying most of my planes from the VC, but the VC view in several planes tends to "cut off" some of the visible gauges. I've tweaked one setting in my "FLTSIM.FLT" file to the following value:

The "000.83" VC zoom setting puts most of my "default" VC views in a comfortable position, where I can not only see all the essential gauges well, but in many cases, this also puts my "eye point" back far enough so that I can get at least some feeling of "fake peripheral vision" out the side window.

The Super Decathlon is a small, light, two seater (front and rear, not side by side), with wonderful visibility in all directions. The fact that this is a taildragger with no flaps means that ground handling, takeoffs, and especially landing must be performed with an accurate touch in order to not damage the plane by crunching the wings into the ground, or landing too heavily on the gear. Even though we all like to just jump right into our new planes and take them for a spin as soon as we get them, I do recommend reading the included documentation to get the most out of flying this beauty. It's a fairly "simple" plane to fly with regards to instrumention and such, but it can take a bit of practice to really fly it well. Approaches and landings are lots of fun with it as well; though to consistently land it with grace requires some practice.

Flying this plane in the simulator feels, I imagine, just about as close to "seat of the pants" flying as any plane in this PC based simulator can. It's truly a fun plane to fly in the sim! 😀 Oh...and this plane also comes with smoke effects, so if you want that, just press the "i" key. The smoke effect is especially nice if you use it in "spot view" as you watch a replay of your aerobatic maneuvers.

Until I got the RealAir Simulations version of this plane, I've been enjoying the freeware "Super Decathlon" from "FlightFactory/Airhead":

I now consider the "Airhead Super Decathlon" a nice primer for the simulated pilot interested in the SD, but I can now see that its flight dynamics are much more forgiving than the "real thing" might be. If you really want "as real as it gets", I do highly recommend the RealAir version.

So...can you tell that I really, really like this shiny new Super Decathlon of mine? 😀 If you already enjoy "seat of the pants" flying, or even if you're a jaded simulated airline pilot, give this little wonder a try!

I took your advice and downloaded this beauty. The handling, sound and finish on the craft are outstanding.
I posted this in our photo gallery.

Thanks for the tip. It's as if I had a payware for free, excellent. 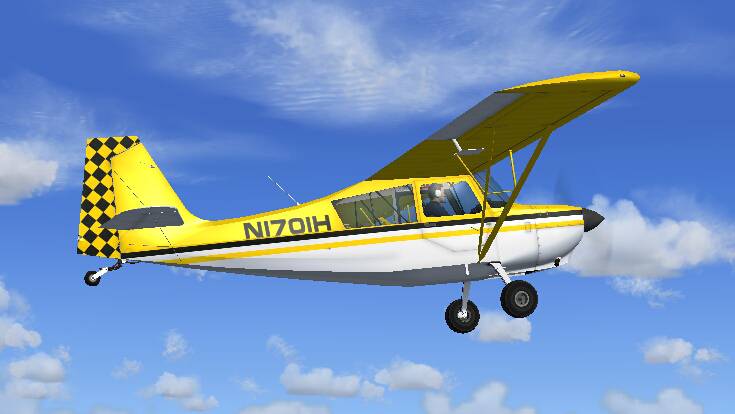 I took your advice and downloaded this beauty. The handling, sound and finish on the craft are outstanding.
I posted this in our photo gallery.

Thanks for the tip. It's as if I had a payware for free, excellent.

From the looks of it, you're referring to the freeware "Airhead" version of the Super Decathlon, right? It is a nice plane, and as freeware goes, I think it's really nice. However, I hope you also realize that my "glowing review" was referring to the payware version of the SD by RealAir Simulations. Also...the RealAir version doesn't have that "crosshair" in the middle of the windscreen (hmmm...what's the proper name for something like that anyway?...surely it's not "crosshair" 🙂 )

Anyway...if you like the "Airhead" freeware plane, you'll love the RealAir payware version...even though it's not free! 😀

I thought that I would post the link for the Decathlon (free) aircraft that I posted above.
Thanks for the link again watersprite. 👍

The handling, sound and finish on the craft are outstanding.

Regarding the "handling" of the freeware "Airhead" Super Decathlon, after now using the payware version from RealAir, and also consulting with my real life aerobatic performer/instructor correspondent, I would have to say that the freeware version's "handling" is not "as real as it gets". True, it does seem to "handle well", but it's much more forgiving, apparently, than the "real thing". According to the real pilot I mentioned, the "RealAir" version of the plane is much more realistic with regards to all aspects of the flight dynamics.

Also, the sounds included with the RealAir plane are much more "real" as well.

I'm not saying that the freeware plane from FlightFactory/Airhead is bad at all; indeed it's lots of fun to fly in the sim. I'm just saying that when it comes to flight dynamic accuracy in relation to a real Super Decathlon, perhaps it's not the best example.

I'm more than certain that you are correct. I mean that the "freeware" is superior to other freeware that I have seen, therefore the "payware" must be far superior to what I downloaded.

If you want something that's "the best" you have to pay for it.

If you want something that's "the best" you have to pay for it.

I have this download myself and it's a great and fun plane to fly. With a smoke on switch you can trail your stunts. It's great to watch what you can or maybe cannot do as far as stunts are concerned. It's a real challenge. Great plane, try it! 😂

Another pilot who has had some experience in a real Super Decathlon just mentioned a tweak for the "aircraft.cfg" file of the RealAir Super Decathlon that owners of this add-on might want to consider. The file for this plane is found here:

Apparently, in order to achieve even greater realism, you may want to change this value under the [piston_engine] heading)...

When you look at the original entry, you'll see that the developers did in fact consider the "1.15" setting (makes the plane a bit faster), but most probably turned it down by default to make slowing down for approach/landing a bit easier in the sim. "Slipping" is another "real world" technique used to slow down this plane for landing under some circumstances, and this capability has been nicely programmed into this model.

In fact, the plane also comes with modified "aircraft.cfg" and "decathlon.air" files to even further enhance the "realism" of taildragger behavior. There's a lot of information in the various bits of documentation that comes with the plane, so if you do get this plane, go into not only the "Start menu" options to find some of the documentation, but also into the plane's "aircraft" folder in the main program to find additional "readme" type files.

The more I fly this plane, the more I love it! There's certainly no chance of setting the [non-existent] auto-pilot and becoming bored while flying. This is "hands on" simming at its best! 😀

Downloaded this little beauty yesterday, and it's great! 😉
Having a bunch of fun with it. thanks for the link.
🍻