I've been flying FS09 since it came out, and I've seen a lot of weird stuff-- the airport in a box canyon up in Alaska, the Aurora Borealis, the underwater airport in Canada (CYRV), the Chicken Restaurants all around the world, but this takes the cake.

I was flying across Missouri (that's in the middle of the US, for you non-USA residents. The FLAT part in the middle of the US). I am on an across the USA tour by Piper Cub, flyin' low 'n' slow. I was 20 or 30 nm north of the the Springfield, Missouri Metropolitian area, flying in fair weather, a few high clouds, but clear at my elevation. I was flying at about 3,500' above sea level, and the local terrain was about 1,000' above sea level.

Off to the northwest I saw a light-colored ridge, that looked like fog or low clouds. As I flew closer, I realized it was a line of hills. On the map, nothing showed there but a lake, so I decided to fly over for a look.

As I flew over the line of hills around the shore of this lake, the land just dropped away in shear cliffs! I could see a road approaching the lake, and then a bridge WAY DOWN below me! As I flew out over the lake, I switched to the Flight Analysis screen, and it showed the surface of the lake below me at more than 10,000' below sea level!

I of course I had to check this out, so I cut the engine back to idle and began to drop down into this canyon. As I passed through about 500' elevation, I saw what looked little waves lapping on a shoreline-- just the ripples; the water was still thousands of feet further down. Down and down I went, until I came to the opposite end of the lake and a shear wall of water, like a blue cliff in front of me. I did a steep turn, and reversed course, continuing to descend, until I was finally approaching the water. My altimeter was running backwards from zero which was kind of confusing, so I did the shift-Z to see my altitude, and I was more than 11,000' below sea level, flying a few hundred feet above the water!

I did a couple of laps along the length of this canyon-- it was a few miles long, and several hundred yards wide, so I could turn and reverse direction if I chose a wide spot. Finally, I picked out a spot of dry land that looked large enough to land on, circled back, got lined up, and put 'er down. There were trees on this little spit of land, so I landed along the shoreline.

When I got the engine stopped, I checked the altitude and it was showing -11,551.5'. If that's not the lowest spot on the Flight Sim planet, I'd like to know what is! One weird thing I saw; at the bottom of this canyon, near where I had landed, there was a high tension tower. I thought I had seen some on the walls of the canyon, but here I was able to get lined up and take a screen shot, for proof.

I got the plane turned around and took off, and did four lengths of the canyon before I could gain enough altitude to get over the edge-- the Cub just isn't meant for that kind of climbing. I set it down at Stockton Municipal Airport (MO3), near the lake. Half of the lake is at normal elevation, about 500' elevation, and half is 12,000' further down.

To see this "natural wonder," I would suggest setting up a flight at MO3, and flying southeast out over the lake. The lake is shaped like an inverted "V," or a lambda symbol if you're GreekMan72 or have played HalfLife 😉 , and the "deep" part is the southeast leg.

After I started this post, I thought I should search and see if this has been reported before, and of course it has-- back in July, in the Screenshots Forum, by alohajoe. But I thought I'd go ahead and share my "discovery" for those who don't know about it.

I'd post some screenies, but I can't because I'm only a guest here. 😉

Nice report , I've posted screenshots before and unless that privilege has been taken away in the last couple of weeks you should be able to too.

Thanks, for some reason I thought guests couldn't post screen shots. I just learn something new every day!

please post screenies!!! if u can...or give us a link to photbucket or whatever you are using. 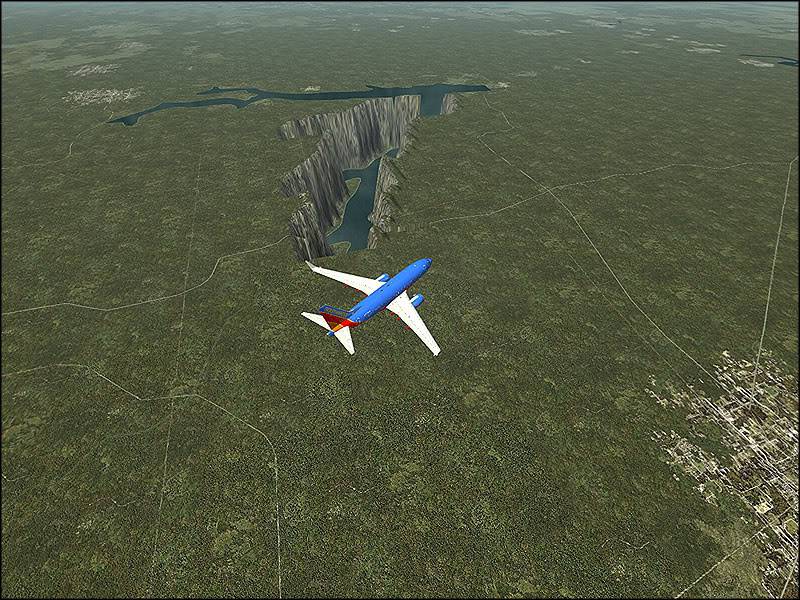 That one? Its just north of Springfield, south of Kansas City. Just another bug in FS9. 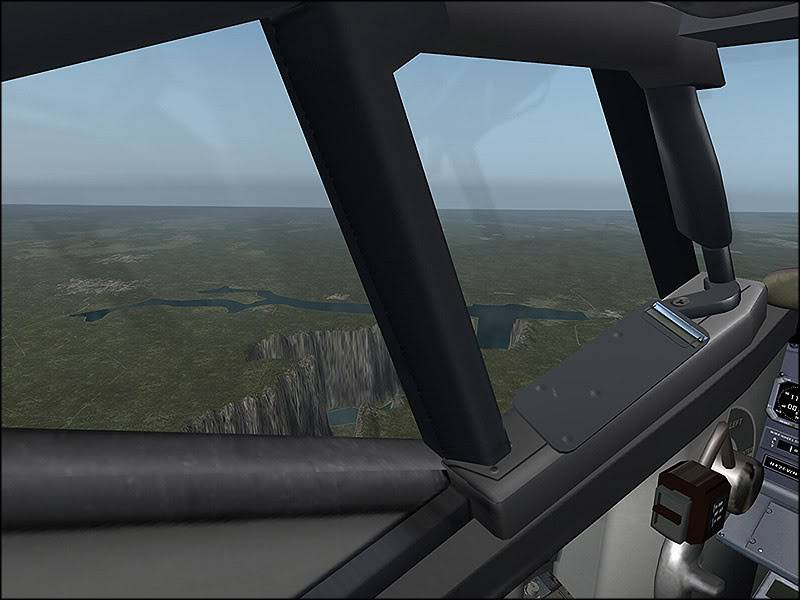 ooo that....i remember you mentioning that in your report...

Adding it to my list of places to go.... if I ever get back to the US in my quest to complete all the historic flights. This looks like a fun feature to explore and I think the Piper might be JUST the plane so you can really appreciate the "depth" of the experience. 😂

haha, nice repot! I flew over there sereral times and I sat there thinking, wtf?

They should build like a seaport down there or something

sounds cool. I might go down there in a helicopter at some point.

Yes, that's the one, thanks. I have a few screen shots of the Cub in places where a 737 wouldn't dare go-- I'll try to get them up this evening.

Be gentle with me-- this is my very first attempt at posting a screenshot. 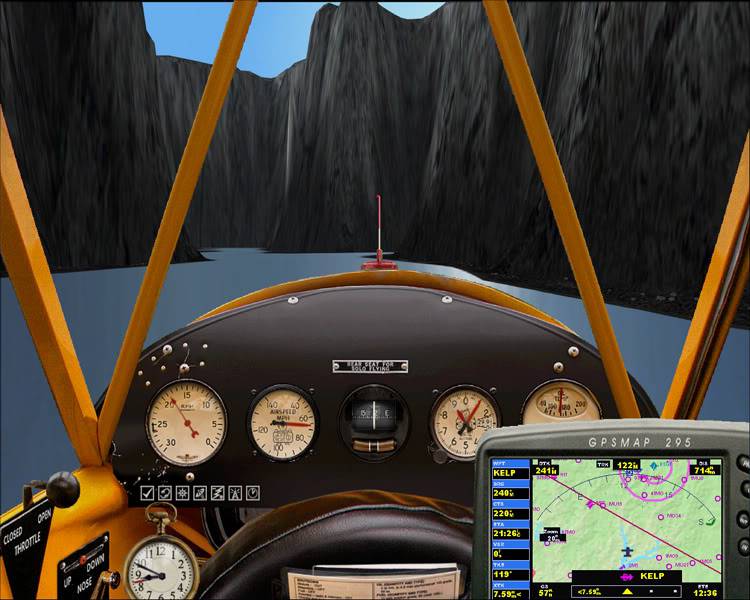 Hey, it worked! Okay, so I landed on the biggest piece of flat land I could find at the bottom of this pit. Here's a view of the Cub, with the canyon wall and the vertical part of the lake behind: 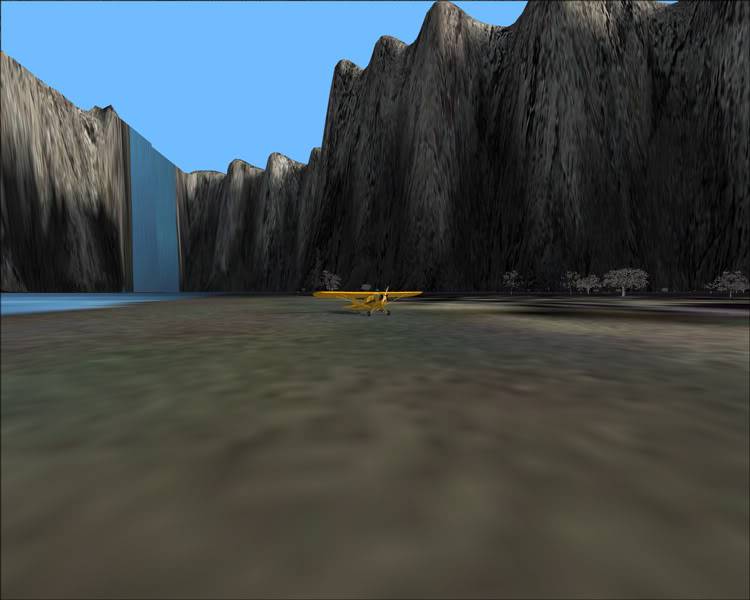 Here's the cockpit view on the ground, with the engine stopped. Two things to notice-- the altitude display at the top of the screen, -11,551.5 feet, and there is a Cessna in the distance, visible through several miles of solid rock. 🙄

And oddly enough, the radio is switched off, but I can still here ATC. ❓ 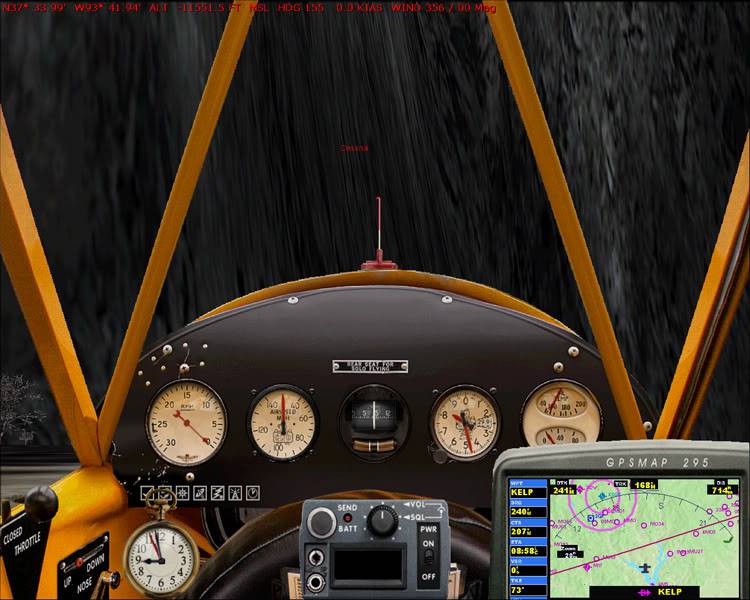 Okay, just one more. Here is the ctrl-s view from overhead. The red X marks the spot where the Cub is sitting on the ground. The left leg of the lake is ~500' above sea level, the right leg is 11,551' below sea level, and the vertical part of the lake is at the narrows between the two legs.

Airport MO3 is just visible at the upper left, at the fork of the two roads. Notice the road running north-south at the far right edge of the picture-- it is connected to the bridge over the lake, 12,000' below (Trucks must use lower gears approaching the bridge)! And that pesky Cessna is still in view (gotta remember to turn that display off when taking screenies!). 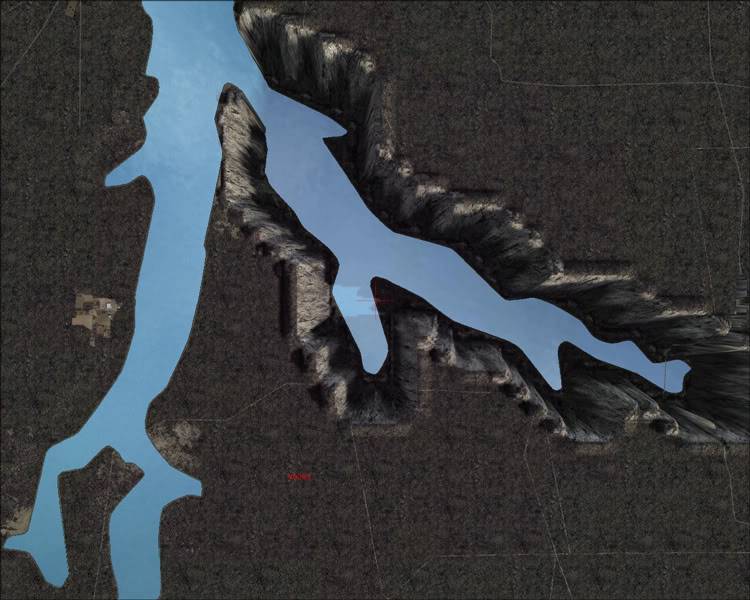 I know there's a patch to fix this kind of stuff in FS09, but it's just too much fun when you stumble across something like this. 😂

Thanks for the great screenshots. That canyon is something else! I'll fly a trip over there just to check it out.

I feel another tour coming on-- the "FS09 Greatest Glitches Tour." I'll fly to each location, and reveal the REAL reason it exists there, that the government doesn't want you to know. . . 😂

But what about CYRV airport in Canada? I've never seen anyone else mention that, and the "fix" file doesn't address it-- am I the only person who's ever landed there? Am I losing my mind? 😕 Eh, never mind that. . .