i have a pci express card slot available in my computer and i was looking for a decent video card, just wanted to get some feedback if this is a good card, or may be suggestion for a better one around the same price range. this is 199.99

I have a preference of Nvidia over ATI and it would take me several hours to explain all the various points, but I would strongly to try and persuade anyone thinking about a new graphics card right now to hang back for just a little bit, because a little bit of patience could pay serious dividends.

Let me explain...unless you are using a Mac or running Linux, then you are probably running Windows.

Microsoft will be releasing their home edition of their next Windows Operating System called "Vista" this month (January).

Now, I honestly couldn't care about their New Windows operating system (as Microsoft is driving me to use Linux almost full time

) are waiting for and that is DirectX 10. And DirectX 10 will only be available with the new Windows Vista.

Without going into too much detail, here is an artist's rendition of the difference between DirectX 9 and the new DirectX 10 available only with Vista (remember this is only a rendition, not actual images). 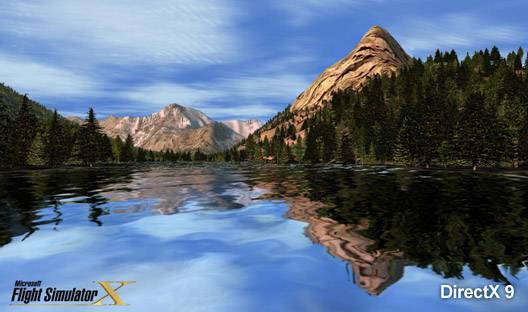 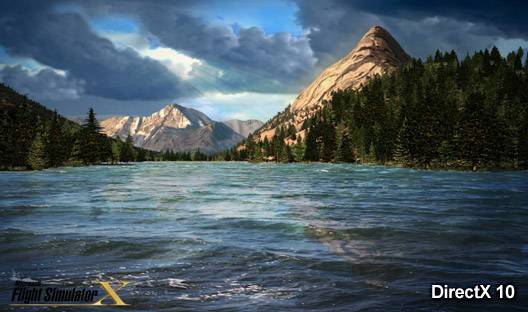 Flight Simulator X was built with advanced DirectX 10 power already in it, just waiting for the Vista DirectX to take full advantage off it.

Even if you don't plan to get Vista and therefor DirectX 10...I would still wait as everyone is going to be clamoring for the new next generation ATI and Nvidia graphic card that will take full advantage of DirectX 10. Which is why both ATI and Nvidia are slashing their prices on their current crop to unload them now as fast as possible, because even though they will ask top dollar for their new cards designed for Vista which take full advantage DirectX 10...their current crop are going to be hard to unload after that.

So, I would hold back for a few more weeks...either way you will have either some fantastic deals for their current crop of graphic cards, or you can pay a little more and set up your computer to use the new DirectX technology to display FSX the way it was meant to be seen. 😉

Anyway, I hope this info helps in some way. 😀

Interesting comment..... I would like to know one thing then; will the current video cards handle Direct X 10? Especially the latest SLi Video cards from NVidia? I have two 6800 GS (German version of the 6800 GTs) on a Nvidia SLi motherboard, on standby to go full SLi mode when I get a non-NVidia graphics card. I believe the latest SLi-ready cards can handle Direct X 10, providing you have the power (both processing and memory) to push it. It will suck to wait for both a OS to come out and then buy the next gen graphic cards to experience what this sim has to offer. I mean, won't the Vista retail for around $250 to $500 dollars a copy? Then, tack on another $200 (or more depending on how you want you graphics to perform) dollars for a suitable graphics card.....not to mention (heaven forbid) you might have to change out your high end single core processor for a dual core one....... You might as well fork over $2000+ for a Falcon Northwest system just so you can run FSX at its optimum levels!!!

There has to be a some sort of version of DirectX 10 that will be available for the XP systems that will be compatible with todays graphic cards. I know my system can handle the software to put out that type of graphics, in SLi mode, that is.

Both ATI and Nvidia say their current (and previous up to a point) are Windows Vista (and therefor DirectX 10) ready.

What that means exactly, I (and everyone else)aren't quite sure. You have to remember that Windows Vista is almost two years late so both ATI and Nvidia had extra time to get their ducks in a row, so many of the current cards were designed to be Vista ready.

Such as for Nvidia..

What has been difficult to ascertain is what the difference between "Vista Ready" and DirectX 10 "ready, willing and able" to take full advantage of the new software is another matter.

The current crop of graphic cards should be able to take advantage of DirectX 10 for the sheer fact that they had DirectX 10 for an extra 2 years...even though DirectX 10 itself has been changing as well.

So to try and answer your question, both ATI and Nvidia cards will not only able to handle DirectX 10, but they should be able to take full advantage of it. However they were working on beta copies of DirectX 10 that have been changing, and I don't think anyone is going to truly know until they have the final release of DirectX 10 and can run both the current and next generation of graphics cards on it. Which is another reason to hold off, until all the dust over this finally settles, and we have concrete benchmarks to determine what is truth and what is BS (because right now, I think there is a whole lot of BS). 😉

There has to be a some sort of version of DirectX 10 that will be available for the XP systems that will be compatible with todays graphic cards. I know my system can handle the software to put out that type of graphics, in SLi mode, that is.

I didn't address this properly in my last post.

What I have been told is there will be no DirectX 10 release for any OS other than Vista. MicroSoft knows that really the only thing computer enthusiasts are really salivating for is DirectX 10.

They said they will continue to support DirectX 9 for XP, but they will not release DX10 seperately from Vista. Which I'm pretty sure you wont be able to isolate the program from Vista, copy it and use it on XP.

And from my experience with Microsoft they mean every word of it.

Let me finish my dinner, and I will research this a little further to see if there is any new information regarding this posted.