How do you get an AI package to work in FSX? I got the World of AI package with about three liveries. When I installed and ran FSX, I didn't see any aircrafts at the terminals. So can somebody show me the way? 😀

Are you sure the AI package is fsx compatible?
If it is, try reinstalling or setting the trafic slider higher.

The World of AI installer is FSX compatible, I finally have the Delta livery at KBWI, but not at KSEA. I also have the Qantas livery and Starflyer Japan livery, but they do not show up at any airport. I am beginning to think that they only show up at the airport they actually fly from. I will get the Luthansa livery and see what happens at KBWI.

Dont know about the world of AI. But MyTraffic X seems to be working pretty well for me.

Pm me where to get the AI

What do i do with the .woai?

What do i do with the .woai?

First you have to get the files.....wait here is an easy way:

Google BWI, then get a list of airlines that has a hub there. Then you go to WOAI and download the liveries that matches the airlines at BWI. FSX is so accurate that only the ACTUAL AIRLINES that fly from the real airports, flys from the simulated airports!!! Say for instance, Qantas airlines actually do not fly from BWI, so the airline will not show up on the simulators version of BWI.

Well anyway, WOAI has an installer package. You will have to download that first before you begin downloading files from them through AVSIM. when you get the package, extract it to the desktop, cause it wouldn't do any good in FSX. As you download any liveriies, they will come in ZIP files, but you can leave them alone, for the WOAI installer will extract them directly into the location of the FSX or 2004 programs, which in our case, the Simobjects> Aircraft folder. once you finish installing the liveries (with included flight plans for all the AI within it) all you have to do is fire up FSX, go to either you favorite or home airport, and they will be there, in the ACTUAL CONCOURSE they fly from!!!

In this pic Japan Airlines (JAL) do not fly from SEATAC, however, quite a few does, and they have their own concourses. That is why in this pic they are spreaded out....even British Airways has their spot at SEATAC!!!

I will go to BWI tonight and see if I can get a shot of the gates, I downloaded a lot of liveries and there a lot of them there. 😀

EDIT: Here is an overhead shot at BWI.... 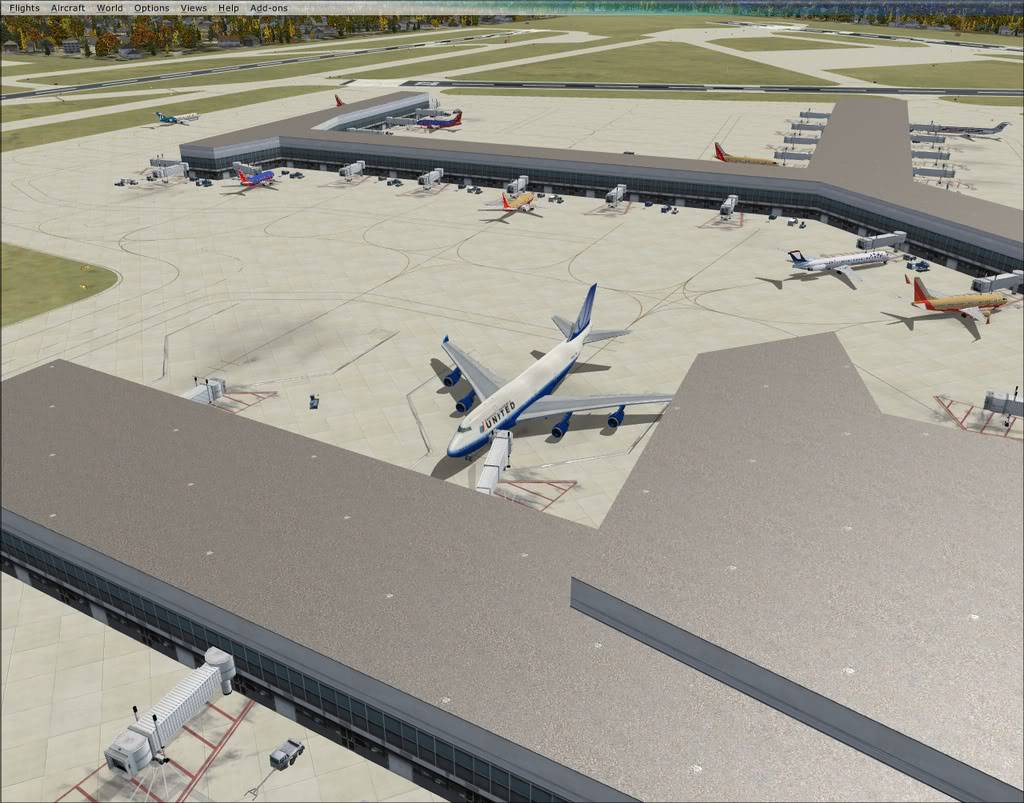 Here you have Air Trans, quite a few of Southwest airlines, American, Delta, and not shown are the Fed Ex and a couple of UPS Cargo planes. Now not shown are what is coming into BWI: there are over 30 flights coming into or leaving BWI!!! The "view aircraft" list spans from the top of the screen to the bottom! I tried to wait till they all arrived, but I got that OOM (out of memory) error again!!!