Hi folks, I just threw out my old logitech gamepad controller as it kept losing calibration - absolute garbage. I found out that Microsoft released an adapter to use the Xbox 360 controller on PC's and don't laugh, it works very good. So smooth with no dead zones. I have often considered the CH Yoke but my desk is angled 90 degrees (could be difficult to find somewhere to mount) and I don't have the room to leave it on my desk full time. I would assume that it's not easy to attach and remove? For now, I have resorted to using gamepad's as an alternative. I've grown quite fond of them for FS. I can't figure out how to map the Xbox 360 controller triggers as throttle controls? I googled it and others out there have the same issue. Anyone know of a trick? Microsoft + Microsoft so it should work.

I would recommend you do yourself a favour...Invest in a SaitekX52, The price is a lot less from when it first came out, Its a much better flight stick than most, much more 'realistic' feel without blowing all your hard earned cash on something you may not like - sort of an intermediate between game pads and a full on flight yoke, but thats just my opinion 🍻 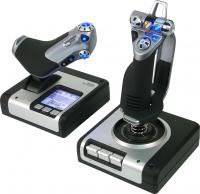 Got one. It's brilliant.

Does anyone have the 'Pro' then?

I have tried joysticks before and never liked them. But -- that may be a better option.

I used the Microsoft Sidewinder stick for years, it had everything I needed also for combat and is still in mint condition. What finally made me change was the awkward position of the throttle at he base of the stick. Obviously, there's no 'workaround for that.
As I got more into Helicopter flying, I would often inadvertently turn the throttle wheel into the opposite direction of the one I'd intended... very, very frustrating.
Now I've got the stick in my right and the throttle in my left hand, with the monitor in between. Thanks to this set-up I have become a 'smooth operator' 😀

...all I gotta do now is figure out how to program the damn thing

Does anyone have the 'Pro' then?

How do you program it then? Where do you start with your profile decisions?

Tailhook, I've yet to work that out! 😂

As I've said before, I'm not a genius with anything technical!

I love the X52 Pro simply for how precise it is. I just gives you the greatest control. And a feeling of realism too.