Looking for the best video card for a new build...

I am currently building my new dream machine solely for FSX ... any suggestions on a video card that can handle it all ? Is the GTX 280 overkill ? Is there one card that has been known to just kick butt ... I want to be able to push the sliders all the way without a hick-up. Thanks ! 😎

If you can afford it, 3 x 8800 gtx ultra kicks butt over anything else, and yes...i have done extensive research,believe it or not the old 8800's kick arse over the newer 9800's and I am in the processes of three 8800 gtx's at the mo ( very hard to get a hold of) just waiting on my new motherboard the ASIS striker extreme 2, tri sli is i think the future, just need the power supply (at least 1000w) and the new ddr3 2000hrtz ram from project x, and here comes the expensive part...QX9770 processor from intel, from that, I think FSX will run on extreme full settings withought a worry, but on the downside it costs a bit, on the the upside it will run any game in your inventory without a hitch, happy happy joy joy!!!

Do you think the 8800s are so much better right now because of the drivers ? Do you think that future drivers for the 9800s will fix the issues you have experienced ?

Warlord,
I have a 780i sli board now with two 8800gtx's. I do have a third on hand but I have not installed it yet because of previous issues with sli and nvidia drivers. I an running with 8gb of memory, 4 hard and 4 ready boost with vista 64 bit. As a matter of fact just last night was the first time I actually could fly without a CTDT or BSOD. I am using Nhancer and for some reason I turned Vsync off and everything finally smoothed out. I still need to tweak in my config some more maybe even nhancer . Anyway I'm real curious as to whether a third card will make it even better. I know one plus is that I will be able to heat the house during the winter if I add that third 8800. My system and cards are liquid cooled so it really won't be a problem .

Warlord,
I have a 780i sli board now with two 8800gtx's. I do have a third on hand but I have not installed it yet because of previous issues with sli and nvidia drivers. I an running with 8gb of memory, 4 hard and 4 ready boost with vista 64 bit

A single 9800 gtx, is better than a single card of any other brand (for the time being), but once we start talking sli ( and I think the new drivers are out now, but you must have an nforce compatible motherboard) then this is another kettle of fish, but dont take my word for it, look for yourself: http://www.legitreviews.com/article/659/1/
read through it, and check out the test scores on page 7 (3dmark)
Also gives you a good idea on how the amount of cards can influence your gameplay.

Interesting. If I do use SLI will it disable the second monitor ? I sure like having my instruments on a second screen.

Go here and read all about the new cards.

Here is a best for the bucks at Tom's Hardware

Go here and read all about the new cards.

Here is a best for the bucks at Tom's Hardware

Don't know if you are still on the market for a video card, but just in case, I'll add my 2 cents.

FSX is quite a different animal than most other 3D games. Graphics requirements are quite different too. Because of that, FSX is mostly CPU bound.

If you are looking for a video card SOLELY for FSX, you are fortunate. Mid range cards that are only average for most games are among the fastest setup for FSX.

Some folks will tell you to go with the most expensive Nvidia card, in SLI setup if possible. Most of the serious benchmark I have found tend to say otherwise.

Cards like the 9600GT that go for $120 perform as well (or better) than the much more expensive 9800GTX or the GTX260. In any case, performance difference is less than a 2% in framerate, nothing you can feel.
This remains true even at fairly high resolution with (1920x1200) in Ultra High quality and with anti-aliasing.

Memory doesn't seem to effect the game all that much either. I wouldn't go with less than 512MB, but more than that doesn't make it any faster.

Check these benchmarks to get a better idea: 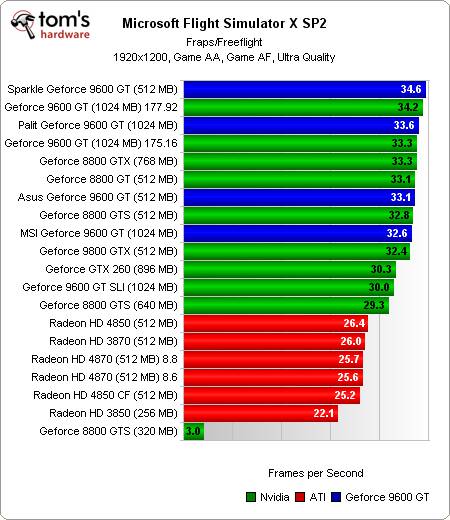 Of course, all of this might change in the future, with more mature video drivers, other service pack for FSX or additional add-on modules.

But right now, I'd go with a 9600GT, 8800GT or 9800GT. Save money on the video card, spend more on 4GB or Ram and faster CPU. (or better components like PSU, motherboard and cooling if you're into overclocking).

Thanks ! I already got the 9800GTX ... I hope their will be some better drivers in the near future, overall the card is great though.