Basically I don't like to fly Glass Cockpit ... to me it takes the fun out of flying ... I'd much rather use the HSI, VOR and VOR2 with the standard radio stack. However, I've encountered a problem that I simply can't figure out. When I set out upon a flight and am programming NAV1/VOR1 the guide arrow always points to the radial ... instead of the bearing of the VOR. In other words I'm forced to ride a radiall instead of riding a bearing ... which I prefer.
I am proceeding from 3G5, heading to the EKN VOR (114.20) and landing at WV00. If I payed attention to the instruments, however, if I did this I'd end up in Afghanistan. Can any one lend some logic to this?

Thank you guys and girls for paying attention to this post.

Sorry I can't figure out how to upload images ... I'd very much like to receive some instruction with that too. I used the Upload/insert image into post but that did not work. 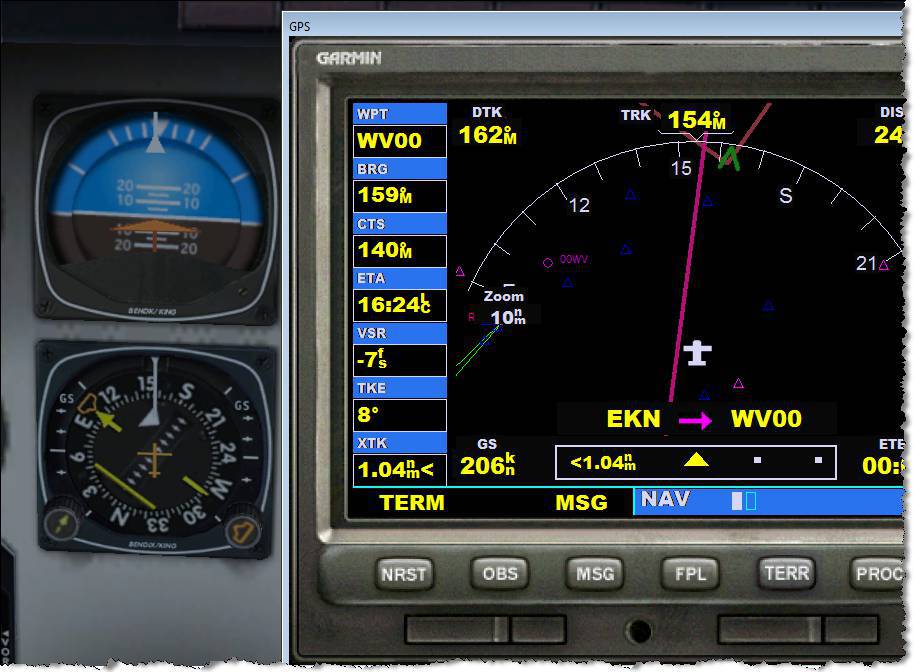 I am not a 100% sure of what you are asking. But if you are flying direct to a VOR, you must fly on a radial. The head of the yellow arrow is the heading to fly when you are on a radial. The tail of the arrow is the radial. So with your pic, you are wanting to intercept radial 280, which would gie you a heading of 100. So you fly 060, until the yellow needle is in the center of the head and the tail. Then you turn right heading 100. You will then fly direct to the beacon.
Let me know if this answers your question.

In response to the person that rather use "steam gauges," I too prefer the analog but the glass cockpit in real aircraft will become the norm. As far as tracking a bearing, I believe this is useful when using an ADF (no longer viable) or an RMI. Radials should ALWAYS be associated and used with VOR/HSI's because a person either intercepts or tracks inbound or outbound on a radial when using a VOR/HSI. I would recommend using the term bearing when using an ADF/RMI or even heading or GPS. I never liked the nomenclature of OBS (Omni-Bearing Selector) either. Omni means "all" whereas, one is only interested in a single radial. It would have been nice if it was called "radial selector." I also don't really like CDI(course deviation indicator - being ± 10°) either, I would have called it something like: "Intercept Angle Indicator - but oh well. I believe that may be one reason many novices (including me at one time) confused aircraft heading, CDI and the OBS. One should keep in mind that the VOR receiver only "knows" what radial it is located on - period! - if valid signal. It's up to the pilot using the OBS to properly interpret the CDI, TO/FROM/OFF flag and aircraft heading. Tim's navigation tool is great for demonstrating this if one doesn't have a flight sim or real aircraft.

I am having the identical problem. If I fly on the radial I would be heading in the totally wrong direction. The GPS works perfectly.

I do not have this problem with the Beechcraft King Air 350 however. When I enter my heading as indicated in the flight log, the VOR indicator adjusts accordingly on the King Air 350 but not on the Baron.

Sorry, my mistake. There is no problem. I suspect Blankenshi was making the same error as me. The direction is set using the 'CRS - Baro' knob situated on the instrument panel to the right of the dash.

In response to Graham Taylor, I 'm not sure you still grasp the VOR receiver, maybe you do. As I've stated before, the VOR receiver can only detect which radial the aircraft/receiver in located ON. With a valid signal, even if the CDi is pegged to one side, the receiver only knows which radial it is located ON. Not to get too technical but it does it by checking a comparison signal to a reference signal which is based on magnetic North of the VOR transmitter. The receiver used the "comparison" signal to detect which radial the aircraft/receiver is located - this is independent of the aircraft's heading. Looking at BTBlankenship's HSI, it can be seen that the aircraft's heading is about 158°. The Heading bug is set at 100°. The OBS is set at 100°. Looking at the HSI (bird's eye view), it can be seen that the aircraft is heading away from the desired radial of 100°. Less any wind, the quickest way to get on the 100° radial is to turn the aircraft's heading to 010°. This will result in a 90° intercept angle to the 100° radial. When the CDI centers, the aircraft will be on the 100° radial. Notice with a CDI centered and with the flag showing a FROM indication, which means a heading of 100° will take the aircraft away FROM the VOR transmitter. When I desire or am instructed to fly [O]utbound on a given radial, I turn the OBS knob so the t[O]p of the VOR indicator matches the desired radial. When flying [I]nbound, I turn the OBS knob so the desired radial is on the bottom/ unders[I]de. Then I can interpret the correct sensing the CDI is giving me. I hope this helps.[/u]