I simply love these modern aircraft we have on our flightsims, especially my A340's from PSS. Their avionics are awsome and so easy to use. Now you see, I want a challenge. I want to learn how to navigate without using the default GPS and with out using the FMC's provided. So I've been doing circuits around Mauritius [ From FIMP- GBY- FF- FIMP] using VOR and ADF frequencies using the default 737. The only problem I face now is learning how to navigate the Airways [Jetways]. So I was hoping one of you could lead me in the wright direction.

Any Help would be nice.

First and foremost, you need charts. Flights using airways are by default IFR and the charts you are looking for are called "en route" charts. Since you are flying in the Mauritius area, get some en route charts for the general region. Once you have the charts, it's easy really:

Airways begin at a fix and end at a fix. This can be a NAVAID (VOR usually) or it can be an intersection. You will then need to know how to identify a navaid and identify when you're flying over an intersection. Be aware there are some airways that begin and end at coordinates which do not form any intersection. They are RNAV airways and you need RNAV equipment (a computer basically) to follow them.

Airways head out from a fix or navaid at a specific track (which you enter into your CRS selector). So let's say airway N123 starts at ABC VOR and heads out at 330 degrees. You will enter the ABC frequency into your NAV radio and select 330 for a CRS and follow the needles (or rose or arc or whatever display your aircraft has).

So how do you know when to turn? Well, you will notice on the en route charts that an airway includes many many other navaids and intersections, where it may turn to a different CRS or not. In the segments between the fixes (over the line usually that connects them) you will see small notes of "D22.5" for example. This means "distance" in nautical miles. If, in our above example, airway N123 turns to a 310 CRS after DEF VOR and the line says "D75" you should follow the 330 radial outbound ABC VOR for 75 nm (watch the DME for distance) then tune the DEF VOR and follow the 310 radial outbound. The same goes if you switch airways.

This is all I can say theoretically right now. Get some charts and if you give a link or a specific image we can discuss it more - someone more experienced can also chip in 🙂

That's tremendous, thanks. I'm sure there are a few other members who wouldn't mind going low tech for a while and trying to navigate like this. It's sounds like a bit of challenge and that's what I want, so once again thanks.

I'll send any charts if I need some more help.

Cool picture in your sig, here is that plane in Qatar... 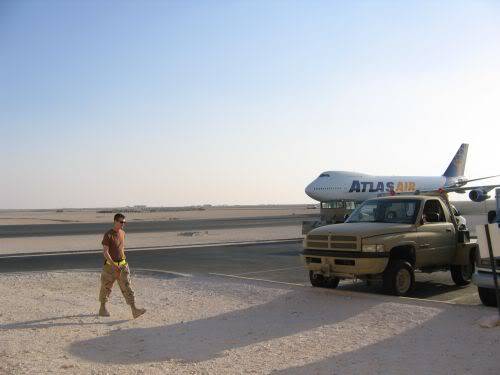 Anyways, for a good practice flight for VOR to VOR, try the Phoenix - Buckeye2 to LAX - Redeye2 route. It takes about an hour.

Are you using FSPax? The thing I REALLY like about it is that you can press (N) and it will input a Nav frequency for you, and you don't have to scroll down the radio with your mouse. It makes this kind of flying infinitely easier.

Just completed flying Mauritius-Reunion and it was a blast. The only prob is, I was a little off track on the airway but navigating properly will come with practise I guess. So I'm off to practise a little. I think I'm going to give your route a try NW, thanks.

One reason you may be off course a little is failure to consider wind drift. When you are navigating on a VOR (or flying any other ground course) in order to navigate precisely, you must correct for wind drift.

As an example, let's assume for a moment you are navigating on the ABC VOR, outbound on the 270 degree radial. With no wind, the correct magnetic course to fly would be 270 degrees. However, lets further assume you have a wind from 300 degrees. If you make no corrections and steer 270 degrees, you will be blown off course toward the south. So, to correct, you must turn the aircraft's nose slightly into the wind. The degree of correction depends on the speed of the wind, how close you are to the navigation station, and the size and power of the aircraft. A ten knot wind will push my C-172 farther off course than it would a B-747. Of course, in the B-747, the autopilot is constantly calculating and correcting for wind drift. In the C-172, the pilot has to do that.

Since winds are rarely steady, the pilot must make frequent minor adjustments to the corrected course. That's one of the skills you begin to learn in the early stages of pilot training (it's necesary to fly simple traffic patterns for landing also) and you should become more proficient as you progress through the various licensing levels and expereince. By the time you have a commercial and instrument ratings, it should become almost second nature, making the course corrections without even thinking about it to keep the needle centered.

Hi JVD,
I found this facinating navigation tutorial on the web, I hope it's some use to you. I'm still learning to fly the trainer but hopefully will get onto navigation in the future.