Putting downloaded aircraft into FS2004 - what am I doing?

I have downloaded quite a number of aircraft without any difficulty and now none that I transfer from either my download folder or from a cd such as those with "PC Pilot" to Programs>Microsoft Games>FS9>Aircraft will work.

I have a DC4 Skymaster just installed and it contains folders "Effects", "Model", "Panel", "Sound", "Texture" "Aircraft.cfg" and "dc4v1 AIR File. The folders contain what you would expect to see.

The aircraft does not appear in the list of FS2004 aircraft and therefore cannot be flown. I have just downloaded a Nieuport XI "Bebe" and used exactly the same procedure. It appears in the list and flies a treat.

What on earth am I doing wrong?

It can be listed under the manufacturers name or you didn't take it out of the "wrapper", that's the folder that the aircraft by name is in.

Also check this out to see if it helps.

Thanks for your reply which I have followed up. So far as I can see everything I do is correct and this morning I downloaded the Avsim Dash 8 Q400 Dreamwings version. It looks absolutely normal and the contents of the model, texture, sound, panel folders are what you would expect to see and also the separate files are there too. I copied into Programs>Microsoft Games> FS9>Aircraft and created a folder for them called de Havilland Dash 8 Q400.

I ran up the FS and there was no signs of the aircraft in "Create Flight".

Last night I also downloaded the Nieuport "Bebe" and it duly appeared, was copied into FS9 and when I ran up FS2004 there it was in the list of aircraft - it flew ok too.

I looked at the webaddress in the reply above but this didn't seem to help as I could see no signs of the word "Alias" in either panel or sound folders. I also noted that the document didn't appear to refer to FS2004 at all but to 2002 and earlier systems. So I'm not sure what that tells me.

So the score at the moment is 5 planes downloaded to my pc and put into FS9 and only 1 appears in the list and can thus be flown. They all have identical format structure so I must admit to being baffled at the failure of most!

It's not going to say the word "alias" that has a entirely different meaning.

You have 3 windows with aircraft information in create a flight.
In the top window put "any" the in the second window slowly scroll through the aircraft list.
The bottom window gives you the choice of liveries.
Try that and see if you aircraft is there.

I found the Dash 8 under Bombadier not DH. I think that scrolling down the list sometimes passes over a bit quickly and it is easy to miss one if you aren't quick enough.

Now to see if I can fit the AI Texture for a "FlyBE" aircraft - I flew from Norwich to Manchester on such a machine on Saturday last. It was quite an experience as after a clear start cloud thickened and we came down at Manchester from 16,000 feet to under 800 before the ground was visible looking down. The gear and flaps were down quite a long time before we cleared the cloud. I guess that had to have been an ILS landing, which is something I want to investigate. It was interesting that the simulation and the real thing were the same in both directions, even to the extent of taxying aircraft in the sim being exactly replicated on the real thing.

The next task is to see where the Douglas DC4 and 6 have gone to - they surely can't be under another manufacturer's name?

I've had an aircraft listed in strange places also, there is a way to "repair" that but as long as you now know how to find it you should be ok. 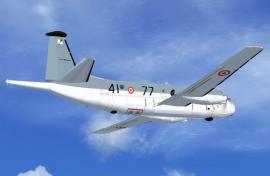