Well I told you that my darling wife had given me as a xmas pressy a 1 hr test flight,well today was the day 👍

Arrived at the Cardiff Academy of Aviation at 13.20 ready for my 14.00 test flight.A quick look around at the main terminal opposite and only one 737 at the gate
After signing in,a quick cup ot tea(sooo british)to calm the butterflies.

Then is off to watch a short video about the aircraft(Apex Robin 'Alpha' 120T ).Then its time to meet the pilot and a choice of where to fly.I chose to fly towards my home and a quick check on a map and a phone call to the tower for clearance and we are off to the aircraft

After a walk around its time to buckle up and I have to run through the check list(these pilots are so lazy 🙄 )The pilot tells me to hold the stick and follow his movements
Start the aircraft and check with the tower so that we can move towards the runway and do a full engine power test.As we go through the test a BMI 737 takes off,so we will have a short wait( 😳 dont they know who I am?

Tower clears us for take off and we taxi onto the active (Runway 30) and line up with the centre line and apply full power and take off speed of 70 is reached very quickly and we are up for a quite bumpy little climb
Tower calls and tels us not to climb above 1500 until clear of the airspace.We then head direct to Newport
Once clear we climb to 3800 very quickly using the aircrafts speed and its a fairly bright day,though a little windy visability is great
Now the pilot shows me how responsive the aircraft is by waggling that bloody stick,then he shows me how to keep levelby using the top of the dash and the horizon,and at the panel. Once we level out the dam fool said YOU HAVE CONTROL

Panic over he tells me to keep the aircraft steady at this altitude and heading,which I do(rather well 😉 )
Now over Newport and can see my house
OK he says a gentle right turn and head back towards Cardiff(at this point he could of left and gone and had a coffee..but in-flight service was out 😉 )
We start our decent and hold at 1500,avoiding the chemical plant at Cardiif docks
When then have to look out for a helicopter at 11o'clock followed by a Cessna on final
We (I) turn towards the runway and see those familier two red and two white lights,Keep on,he says,so I do,watching the lights,the altimeter(he controled the throtle)
Three white lights,push the nose down,throtle back,but the wind seems to hold us up,ok two red two white,the nose of the aircraft now pointing towards the main terminal but we are heading(crabbing) towards the centre line
At about 60ft the pilot pushes the stick forward and we drop then feather and touch down

G-CBLE Turn next right taxiway,be aware of the Cessna and taxi to club parking

Taxi to parking and the shut down check list

Here is a pick I took of the Robin after landing(now do you trust me to borrow the car?look not a scratch on it) and a link to the clubs web page about it 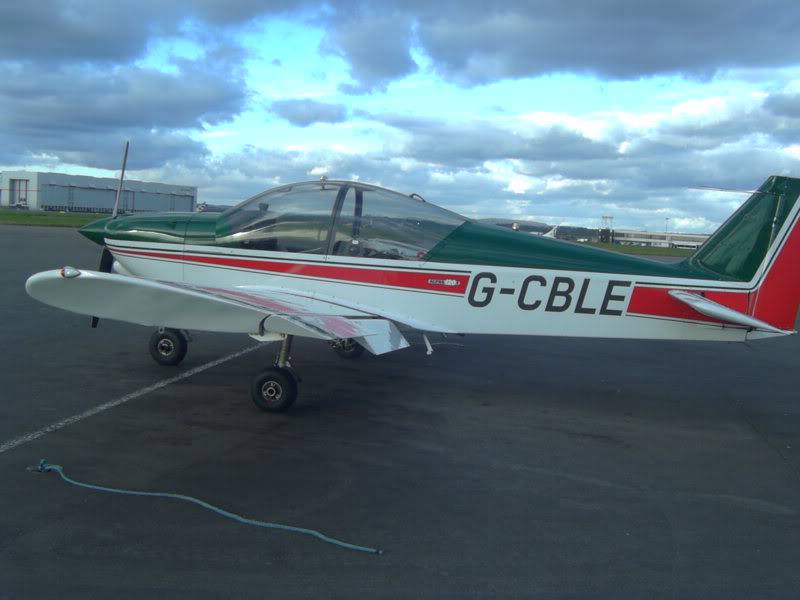 And a link to the main page

That was,quite possably the best hour I have ever spent and If ever you get the chance to have a go....DO IT 👍

I have a video of it all,though the camera work is bad(she cant be good at everything........though she says she is) and I will cut it down and post soon

This will cost me dear tonight as I take her out for a few drinks and a meal,but after today,who cares how much it costs

Are you gunna become a pilot? Sounds like to had fun! 😀 ON my first flight last year we flew around Catalina (KAVX) and then back agian to Long Beach (KLGB) We flew in a Cessna 172 because my parents sat in the back seats. It was for a birthday present. I have flown some since then. My flight instructor just recently moved to Kansas so we have to find another one. I am training with the Long Beach Flying Club and Flight Academy. www.lbflying.com

Congrats Chef Captain, It sounds as if you had a wonderful time.
Did your knowledge of the flight sim make the flight in the real aircraft any easier or more familiar.

Okay, now I'm as jealous as I can be. Time to start dropping hints with the wife.

She once surprised me with a trial parachute jump, so this is not out of the question. I've seen what a DC-3 looks like from underneath (and receding in the distance 😳 ), but I think I would prefer to see what the landing is like from the FRONT SEAT.

Both of the CAA's aircraft look pretty nice-- no pokey little Cessna 150 for you!

Yeah. Flying is alot of fun! I may not be up again for a few months though. I wish you luck.

😀 Still got the smile on my face 😀

Yes I think it did,I knew not to move the stick to quickly(though the pilot did) and I knew the lighting system on approach and how to use it

Anyway here is a link to the video (10mb)its not very good quality in places and the camera work 🙄 ,well the less said the better

Sorry about the music,but the sound recording was bad because of the wind and I had to hide her voice

Should be on the above link for one week 😉

How long does this bloody grin last 😀

Sounds like lots of fun I wish i could do that what is the age limit ❓ .Maby for my birthday.

I'm still to young unless its different in Ireland.

Ranald - I would encourage you to check age requirements where you live. In the USA, there are minimum ages for soloing and for receiving your private license (16 and 17 I think but I'm not sure) but no minimum age for flight instruction. Instruction at very young ages is not practical because a person would not be tall enough to reach the controls or see over the panel but training can begin as soon as the student is physically able to fly the plane. We have many young pilots who have received training and are sufficiently competent that they can solo on their birthday and receive their license on their birthday that makes them eligible.

At least you got your deposit back (surely they must take a deposit before letting welsh scallywags fly planes).

Got to dash as I am abut to grab a cuppa while you're video is downloading, and then watch it !

Aren't you tempted to go for the full PPL now ?

Thanks don Wood I will check it out 😎

Believe me, I asked myself that same question many times. Peer pressure is one reason-- there were about 20 other people at the start of the flight and we kept making passes over the landing zone. By the time my turn came, about 10 other people had already disappeared out the door, and my brother-in-law was right behind me, so stepping out the door seemed easier than saying "Well, folks, I've changed my mind."

Just took in your video TTT - very good (loved the "Look around you" style music!).....

My other half was having a doze and I woke her up laughing my head off at the point where your good lady says "Oh my god, he's up in the air!", at which point the screen graphics state "Yes, thats what happens when you fly"..... love it.

It's great to have a vid like that to remind you of a superb day.

Yes it was great shame the landing was not filmed

Enjoyed your video. You deserve an Academy Award for acting so cool and calm, when I know on the inside you were jumping up and down and yelling "Whoo Hoo!!" like a kid! 😂

Enjoyed your video. You deserve an Academy Award for acting so cool and calm, when I know on the inside you were jumping up and down and yelling "Whoo Hoo!!" like a kid! 😂

if I have the time with my work as it is just now,very very busy,but all flight time can/will count towards your total

😀 Still got the smile on my face 😀

Yes I think it did,I knew not to move the stick to quickly(though the pilot did) and I knew the lighting system on approach and how to use it

Anyway here is a link to the video (10mb)its not very good quality in places and the camera work 🙄 ,well the less said the better

Sorry about the music,but the sound recording was bad because of the wind and I had to hide her voice

Should be on the above link for one week 😉

How long does this bloody grin last 😀

Sorry I just got to watch the video. It is hard to keep up with all the posts. Nice video. What kind of airplane is that?

TTT, that was so cool. I like your little commentaries too. you weren't the dude with the gut right?

The logo at the end was cool too! 😎