I just got back from seeing the new King Kong movie and I firstly have to say its the best friggen movie ever!!! Peter Jacksons abilty to create movies astounds me and I recommend you all go watch it asap!

Now, moving on to the topic of flight simulation, I'd like to see an addon for FS2004 with aircraft and scenery from the movie! I reckon someone should make the infamous 'Skull Island' which is suposedly located west of Sumartra, Indonesia with the deserted fortress and shipreck. I also think they should create a addon for NYC with King Kong perched atop the Empire State building, with smashed buildings around the city centre! And the main part of the package should be the aircraft used in the film, (I think they are Boeing Steerman bi-planes) which are used to shoot down Kong which you can fly and actually knock him off the tower, or if you fail he smashes your plane 😳 😎

I found a King Kong addon of avsim here: http://www.esbnyc.com/index2.cfm?CFID=14500883&CFTOKEN=3228490 if anyones interested, but it looks highly un-realistic!

Please add your comments people, of if your a scenery/aircraft developer, prehaps you could build some of the stuff in this thread... ❓

YES i loved it so much it inspired me to go fly over new york got some pretty good screnies of empire state , 3 hours of awesomeness. 10/10 reccomend it to everyone.

I just deleted 5 of his ?posts? Sorry that happened.

I felt KK was the first example that I have seen of simulated airplanes in a film, in daylight, that came even close to being convincingly realistic. The whole movie was some ride.

Yea I have seen King Kong and its another master piece by the Director but I dont think it is as good as Peter Jacksons Lord of the Rings. A skull Island in FS 😀 thats a good idea

Agree and i think that the reason is obvious.
The stories are different and the LOTR is based to one of the biggedt epics in history from a great Writer(and not only...)

I remember Donkey Kong in some old consoles of Nintendo and in coin machine games...long time back... 😉

I guess that maybe there is an PS verison of it but im not sure...

I just deleted 5 of his ?posts? Sorry that happened.

But, you are acting like a two-year old. Posting lots of meaningless posts just because you want to be first officer just shows your disrespect for the others who use these forums.

He posted about five posts with meaningless stuff like, "whee!", in succession. After finding out in another thread how you get promoted, he decided he wanted to make first officer quickly.

He could ask from Moderators to increase the number of his posts(i think they have access to something lke that)to 118.256.... 😉

That's not an excuse for your actions. I think you need a "mentor" because there's several 12 year olds here who behave more like 18 year olds. Very well mannered, and their posts actually mean something 😳 I know that's an unusual concept for you, but it's true.

PM Mypilot sometime and ask him how he manages to act so well-mannered.

He could ask from Moderators to increase the number of his posts(i think they have access to something lke that)to 118.256.... 😉

I could also write a script that every time he got to post 49, it reset to zero.

Did his parents pay for his registration? Tisk Tisk.
I have been using internet forums since I was 11. Please, at least act like an 10 year old. It cant be that hard, can it?

ROTFLMAO, Have you even hit puberty yet! You should have kept you mouth shut 'nik_simpson' you have just embaressed yourself further...

ROTFLMAO= Rolling On The Floor Laughing My Ass Off

ROTFLMAO= Rolling On The Floor Laughing My Ass Off

ROTFLMAO, Have you even hit puberty yet! You should have kept you mouth shut 'nik_simpson' you have just embaressed yourself further...

Actually, I think it is time to let him know that he can come out of hiding...as long as his posts have some meaningful content. 🙄

What does this have to do with king kong? 😕

Yes, there is now for Playstation. Saw the ad on TV.

Yes, there is now for Playstation

Its been out for ages (since november in NZ), and its also on XBOX, Gamecube and PC. The offical website is www.kingkonggame.com

Yeah!!! Pretty cool!!! I will go see the movie tomorrow here in Nuernberg Germany. There is a cinema that plays the movies in English. I have the PC KK game and it is a BLAST!!!!!! 😳 😳 😳

I just took a flight over NYC in the 1930's (went to the ALT menu, then "World" then "Time/Season" and adjusted the date) just like the King Kong movie setting and realised that it is no different from the current day (2006 date setting) See the screenshot below, where the metlife building is even visable! 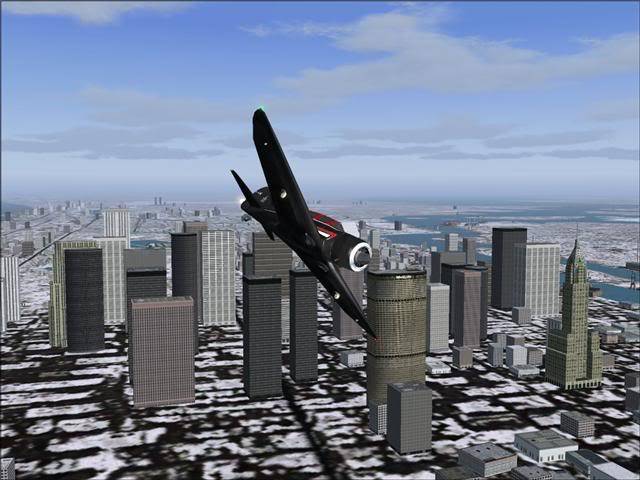 This got me thinking, what is the point of adding this features if the scenery doesn’t change? Even the AI traffic is the same, with lots of big Boeings and learjets still flying around instead of the expected default bi-planes.

The only time I have ever used the date change feature before this is for flying over a addon volcano package in Naples, Italy to see smoke rising out the crater when it was active in the 1940's!

BTW Elkinallen, I hope you enjoyed the movie! 🙂