In my current flight adventure of recreating flights in the 2004 default flights, https://forum.flyawaysimulation.com/forum/topic/23275/pre-programmed-flights-in-fs2004/ I continue to learn some pretty fun things relative to flying.

Currently I'm using the Vickers Vimy to fly from London to Australia trying to adhere as much as possible to what navigational tools they had in 1919.

As a result I've experienced a good deal of satisfaction in managing to hold compass headings without gps, looking at coordinates, or looking to the sim's map to show my current position. (As you will see in these shots the coords are at the top of the screen but I refrain from looking at them and matching them to the map at my elbow.)

One of the big challenges to holding a course is cross winds.

I want to share some graphics I made to firm up the technique I use in my own mind, hoping they might also be helpful/interesting for others that are new to the particular challenge of wind. I realize that for most of you this is old hat.

Here is the challenge and some things to think about. 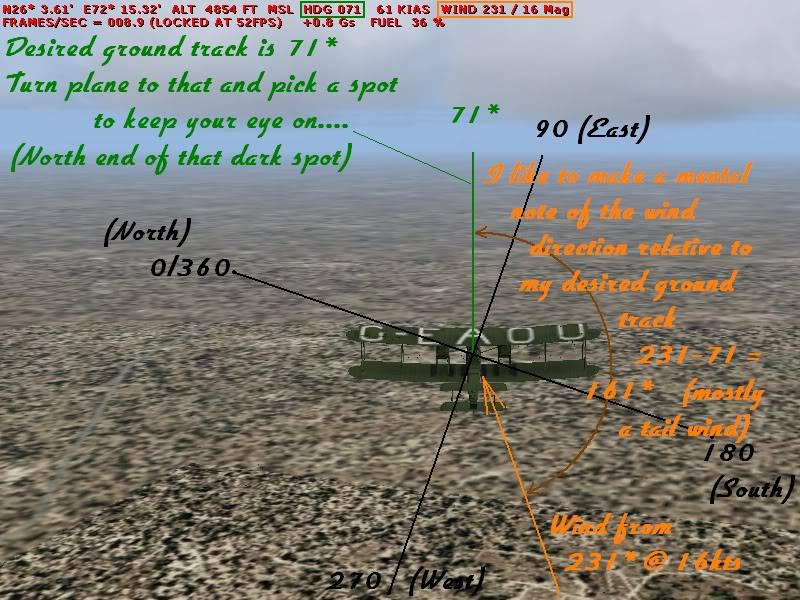 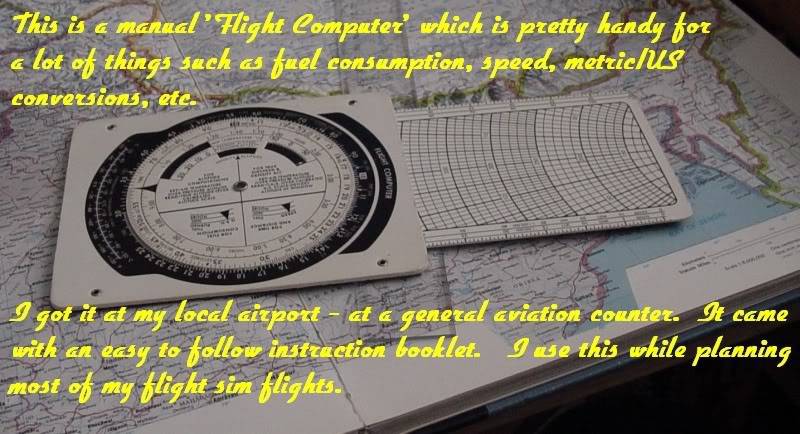 Angle and strength of wind. 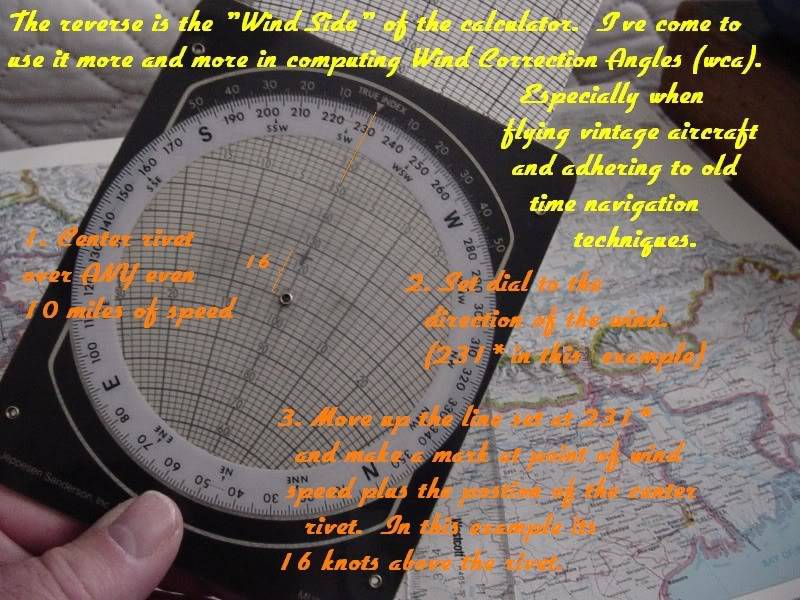 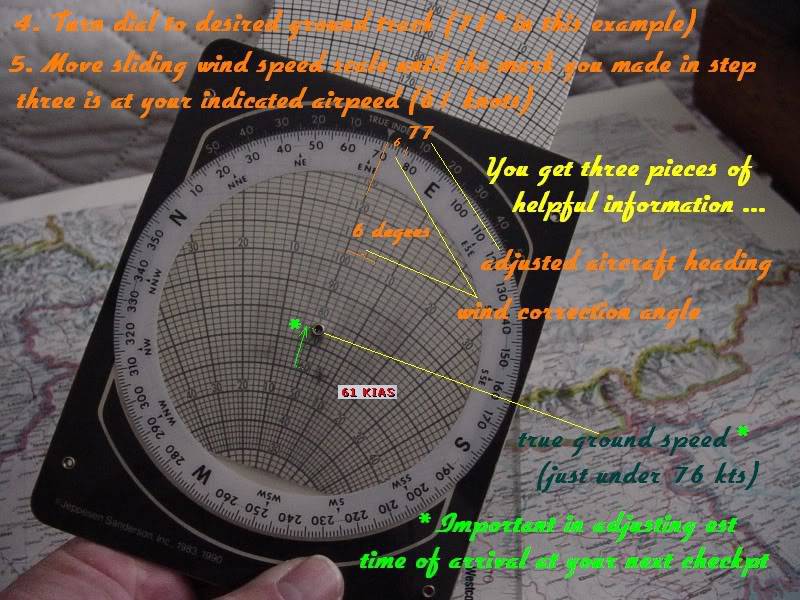 Yaw (pointing one way while actually moving another) 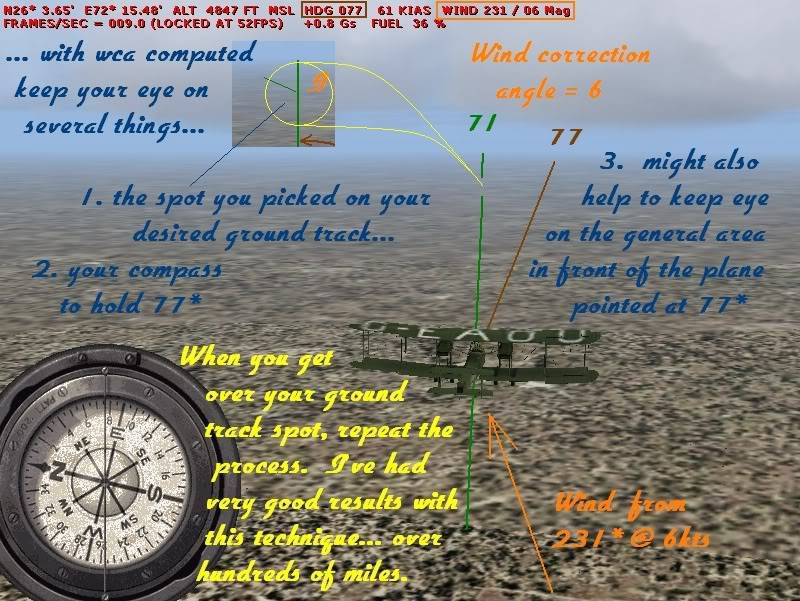 Even more important when you have no landmarks in sight... clouds or over water. 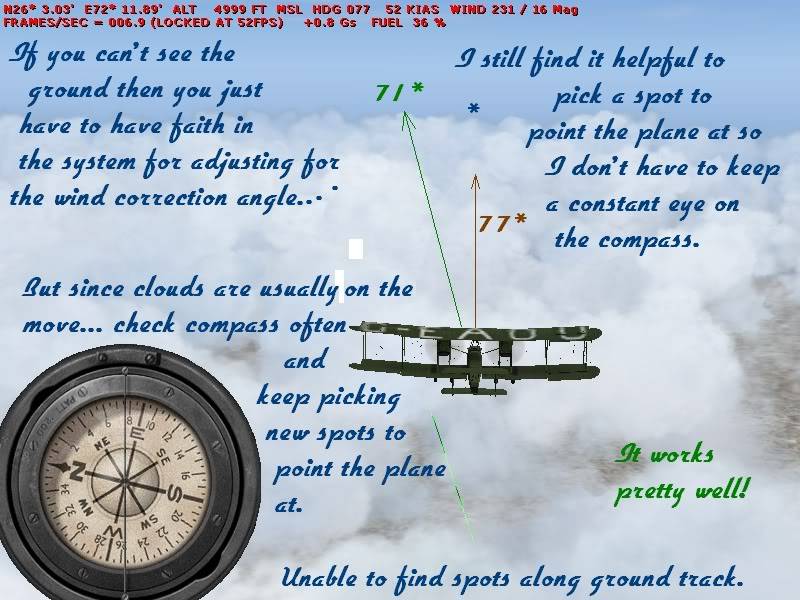 And... why its important to get an idea of true ground speed and have an accurate clock to dedreckon your way to your next check point. 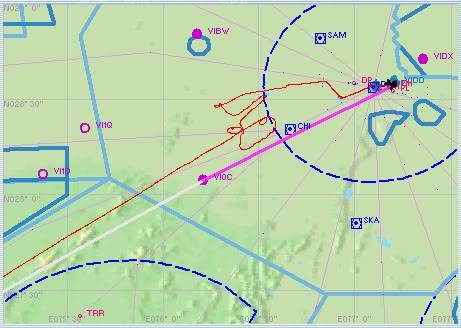 As I said, I won't look at my position on the sim map during such flights. But after arriving at my destination I did open the map to see just how badly I'd done relative to my course after mis managing true ground speed and the clock. In the picture above, I knew by the clock that I had passed my checkpoint (VIOC) and I turned back to look for it so that I would have that exact place to continue my flight from using the techniques described above. Before turning back I made a mental note of where I was but because of clouds, and because I'd failed with reckoning ground speed to the clock I not only failed to find VIOC but also failed to find the spot where I turned back from. At which point I was fairly lost. I decided to fly on a line that I hoped would pick up some landmark I could find on the map and then reestablish my position relative to the flight plan course. I eventually spotted a lake that I'd seen on the map, flew to that and then saw the lights of the destination city.

Hope this will help some of you and encourage all to have some good challenges without all the modern nav helps. Its very fullfilling to fly for 6 hours and actually see your airport come into your field of vision. It tests your faith in the system. But if you let your faith in it waver then you'll get lost for sure.

One thing I've found in my own experience is that I usually will veer slightly left of course. So sometimes if I don't have a really nice spot to look at directly on my desired heading I will pick one that is one degree right of that.

wow...I am so impressed with your abilities to navigate like that...Chapeau Sir..!

I can fly some pretty complex a/c in FS following correct procedures, but if I'd try to navigate on vision only I would certainly get lost over and over again!

But....don't tell me you're flying from US to Australia this way...are you?

Okay, if I ever need to fly around the world in a vintage aircraft, I want you to be the navigator. . . 😀

wow...I am so impressed with your abilities to navigate like that...Chapeau Sir..!

awwww thanks. Its really not all that hard once you do it a couple of times. And if I had an auto pilot it would be much easier.

I can fly some pretty complex a/c in FS following correct procedures, but if I'd try to navigate on vision only I would certainly get lost over and over again!

As you see I did get lost on that trip and have a couple of times before. And while I hate when it happens the added challenge to try and get unlost when you are faced with approaching darkness and/or running low on fuel brings an additional element of adventure that is very fun. There have been times when I've had to just land in a field and then "wave down a local passerby" to "take me to a town or village" where I've been able to "borrow" a few gallons of fuel or to "spend the night sharing the local cuisine and accomodations" before resuming the flight in the morning.[/quote]

But....don't tell me you're flying from US to Australia this way...are you?

Actually I am. But its not totally like taking off from London and pointing the plane in the direction I think Australia is and making all the many compass heading changes along one single course line. I'm using the stops outlined in the default flight so its broken down in those segments (6-12 hour jaunts). And while I don't use the GPS or other sim features that would be comparable to what it does, I do assume that the pilots were able to get some sort of maps of the local areas they were passing through. This might be a stretch because map making for certain areas might have been limited in 1919. I tried finding out about that on line but wasn't able to get the answer.

What I do is prepare a map with my intended course line on it before taking off. And I do use the alt-world-map to get the map sections from at a zoom level such that about 5 to 8 tiles will show the entire flight, and it will also show the bumps of hills, mountains, small lakes, rivers and of course any airports close to the route. Sadly it doesn't show any towns.

Then using the flight planner for estimated time, I use MS Paint to type in with black ink the heading and time it will take to the various checkpoints (places recognized in the flight planner that I can drag the course line to). Midway on those legs I type in grey the times it should take to get 1/4 1/2 3/4 of the way to the next check point. Then as I fly I make mental notes of my ground speed, compare actual sightings of landmarks I see with the map (when possible) and note if I'm ahead or behind schedule time wise. I type my actual times at such points in green ink so I can key off those for the next point. This is far more challenging than the wind correction. Especially if you like to have some clouds in the mix as I do. But it works surprisingly well if you pay attention to the kias and its combined effect with wind to estimate your ground speed.

The bottom line though ARD-DC is that it is very fullfilling when it works out.

Okay, if I ever need to fly around the world in a vintage aircraft, I want you to be the navigator. . . 😀

Now there is an idea for the multiplyer sim element.... actually get on board with another pilot! That might be as scary as being a passenger on a motorcycle!

Actually, I had a boss years ago who got his private pilots license and he knew that I loved maps. So when he had a chance to fly across Utah and part of New Mexico to visit his parents he asked me to come along to read the maps. It worked well until we got on final with the runway in Santa Fe and he wanted me to be to him the runway elevation. I had actually never before looked at aviation maps before this trip. So I was seeing the wrong elevation in a little box for the airport (or something else) and he was sweating a bit as he saw the airport on the hill in front of us get a bit too high in the glide slope. Luckily, I was able to read elevations with contour lines and assured him of the right elevation. Plus, we had good visibility and knowing what I know now it wasn't as bad as it seemed at the time. Anyway, you might not want me as a navigator in real life. 🙄

A couple of days later as we left Santa Fe the flight plan called for us to fly up one of several canyons. The correct one would be no problem with the elevation of the pass at the top. The other would be a bit dicey. We did argue over which was right, but he did bow to my knowledge of ability to recognize land forms on the map and needless to say we didn't run into any mountains. All in all it was an awesome experience!

that is absolutely unbelievable 😀