Please refer to the diagram below 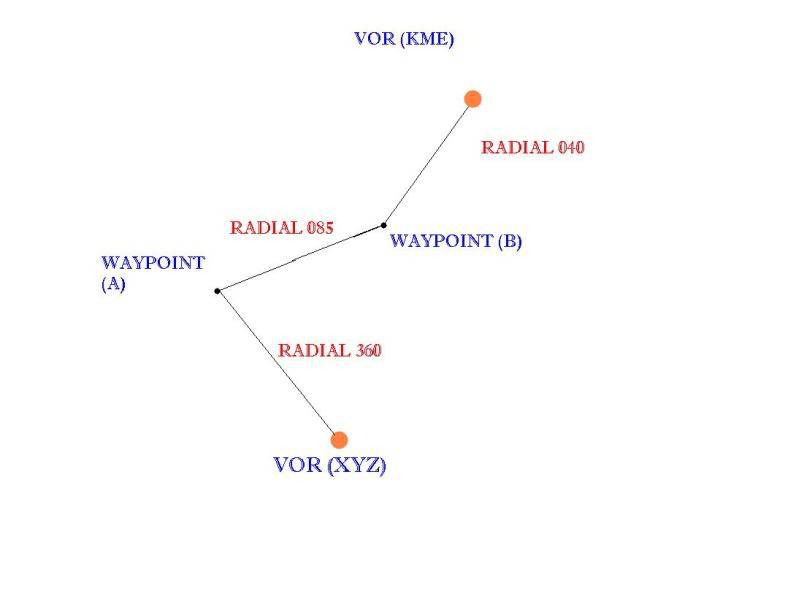 Let's say I navigated out of XYZ on radial 360 to point A - Now I want to go to point B. Do get to point B, due I use the heading bug, or course selector. If it's course, which course do I select. The one that comes up on the NAVLOG never gets me to the waypoint. Thank you for your help.

If A and B are waypoints and not VORs, it seems to me that you need to using the heading bug to go from A to B. But they wouldn't be called "radials" if there was no VOR. ❓

When you pass A, you would fly at a heading of 045 until you reach B, then you acquire the 040 radial from KME and follow that using the Course setting. You only use the Course setting if you are using a VOR, which you're not in this case.

But it seems like you need some other information-- like a distance. Leaving XYZ on course 360, you need to know the distance to point A; otherwise how would you know you're there? Unless you're using GPS. . .

What you call radial 360 of VOR XYZ is not the one leading straight north, so it's wrong I think. For the sake of argument, though, let's dispense with actual reality.

You are passing XYZ VOR and know that you need to fly on the 360 radial outbound to reach intersection A. You tune the XYZ VOR on your Nav radio and set OBS to 360. Now, you're missing some important information on your chart. How many miles outbound from XYZ VOR is A? Or, if it is an intersection and not just a waypoint, which other VOR defines it? (Two VORs define one intersection, with two tracks).

Anyway, let's say you have reached waypoint A. Now you want to go to B and I see a "radial 085" there. Radial of which VOR? It belongs neither to XYZ VOR nor KME VOR (does not align, "point", with either). So, waypoint A to B is a no-go, unless you use GPS or FMC or just know which other VORs are involved.

As another poster indicated, your radial 360 is not drawn correctly, assuming your chart is oriented with north at the top, as is normal. The other radials shown are even less correct.

The radial 085 between waypoints A and B does not have enough definition that anyone can navigate from it. Radial 040 from Waypoint B to KME is so wildly incorrect that what is means cannot be defined. If it is intended to mean that the course to KME from waypoint B is 040 degrees, the actual radial will likely be 220 (the reciprocal of 040) although, again, there is not enough information on the chart to define it.

If this was drawn from a real chart, there is likely another VOR or even more in play. In addition, the use of the word waypoint suggests that the chart depends on either LORAN or GPS navigation. Even so, there is no information on the chart to define where those two waypoints might be. If it was intended that these points be defined by VOR radials, the word "intersection" would be used and "waypoint" would not.